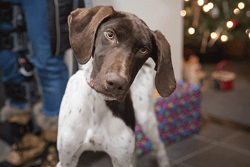 His successful recruitment was made possible through a non-profit run locally by a SUNY Cortland alumna, Sharon McNeil ’01, and the generosity of another Red Dragon, Donnalyn Cross Moran ’11, who is training him to serve and protect the SUNY Cortland community.

But don’t expect him to sniff out danger anytime soon.

Red is what’s known as a “green” dog, still a puppy, really. He’ll go to work for the College next summer.

At five months old, Red is more of a wiggle factory, show stopper and scene-stealer than what he will ultimately be trained as: a bomb-sniffing and missing person-tracking working police canine. Still, a four-legged ambassador for the UPD is exactly what the spotted reddish-brown and white police canine-in-training should be at this point in his career.

In a recent visit to the office of President Erik J. Bitterbaum in the Miller Building, the 5-month-old Red padded to and fro with his handler past some 20 well-wishing humans in a spontaneous hallway receiving line, greeting each administrator in turn with an eager, wet nose, and enchanting puppy eyes.

Acquiring and training Red could have cost the College an estimated $10,000. SUNY Cortland instead will pay about a third of that, thanks to the generosity of McNeil, east coast director of the Sean M. Walsh K-9 Memorial Foundation and Moran, of Homefront Canine of Cortlandville, N.Y.

“It’s great that it’s in the SUNY Cortland family — we’re both graduates,” Moran said. “When Chief (Mark) DePaull reached out to me, I thought, ‘It’s my alma mater, it’s awesome to give back to my College which was the best four years of my life,’” Moran said, before walking off to find napkins to wipe dog treat-residue off her hands.

The foundation will donate $3,800 and Moran pledged a gift in kind that consists of forgoing a substantial part of her regular fee to obtain and train the animal. The remaining cost for having Red on the force will come out of the UPD budget.

“Officer Dave (Coakley) has been knocking on my door for five years trying to get a K-9,” said UPD Police Chief Mark DePaull. “And then we took the leap. Because we had that foundation support and nice discount from Donnalyn, we could provide this service to fill that hole, because there isn’t a bomb detector dog in (Cortland) county.”

For the next six months, Red will be trained primarily to approach and apply his sniff test to suspicious luggage, vehicles, lockers, packages and buildings.

Most of the time, Red and his handler Police Officer David Coakley will exercise their official duty just by making new friends for the UPD among students and other campus community members. That’s not at all like a seeing eye dog for the blind, trained to relate only to its master, or a more aggressive type of police dog, conditioned to defend its handler or chase and apprehend a criminal suspect on command. At times, such as during Cortaca Jug, Commencement, and during major and minor campus events, Red will put his nose to work for campus security.

By next summer, his conditioning will be such that, as Red moves about the campus, any random whiff of bomb-making materials will trigger in him the classic pointing behavior that is closely associated with sporting dogs.

In any bomb scare scenario on campus, Red will be on the front line of exploring the location of the potential threat to either quickly allay people’s fears or verify the danger. He’ll be made available to other organizations that sponsor mass gatherings in the county.

Currently the College UPD must ask state police in Syracuse or Oneonta to send a canine unit to patrol major campus events, according to DePaull.

A suitable police canine is difficult to find.

“What a lot of people don’t realize is that not every dog in the litter is capable of being a police dog, a detection dog, a service dog,” Moran said.

“With police work, we need very confident dogs,” Moran said. “We need dogs like him that, when they come into something new, with 20 people, they aren’t shying away. They’re just ‘Ok, what’s going on?’ and are willing to take it on right away.”

“Red was acquired from a police officer in another state who does the same thing as we do,” Donnalyn Moran said. “He had gotten Red at a young age and had built him up as a green dog for a police officer. Well, the police officer decided he was going in a different direction and so Red became available. So we got really lucky, because a purebred German shorthair pointer that is not imprinted for hunting birds is very difficult to find.”

A police canine costs a lot of money upfront, Moran said. A $500 dog is considered cheap, for example, and probably can’t be trained. The puppy must then be given a lot of training and health testing, said Moran, a former speech and language sciences major who, with her husband’s help, set herself up as a dog trainer about five years ago.

“I always say, ‘You think you understand puppies until you’ve had a working dog puppy,’” she said. “They’re running around and chewing everything and never sleeping.”

Training a working dog involves a lot of positive reinforcement with favorite treats and toys and ever-increasing time outside the kennel as another reward, according to Moran.

“Energy is good because it makes it fun training them,” she said. “In six weeks, eight weeks, you can see if they have the potential to be what we want them to be. Just like that.”

“We’re just getting our name out there in the police world, making police contacts,” Moran said.

Red has been getting his name out there, too, in several local news articles. The campus community also responded warmly last fall, when an electronic survey invited them to choose the dog’s name from the three alternatives: Red, Blaze or Guardian.

“The name Red took off within the first 15 to 20 minutes of the survey,” DePaull said. “The other names did not come even close.”

The San Jose, Calif.-based foundation that has helped SUNY Cortland acquire Red is named in memory of McNeil’s nephew, a 21-year-old Army National Guardsman who died Nov. 16, 2011, in Afghanistan, 10 days before returning from a year-long deployment.

“Sean had a German shepherd, and that was his goal, to be a police officer in a canine unit,” said McNeil, an alumna who majored in education and now works in her husband’s Cortland optometry practice.

“I do it for Sean’s memory. It’s something he would want his mom and I to do,” said McNeil, the east coast director of the Walsh Foundation. “Each dog, no matter where in the country, keeps him alive for me.”

McNeil spends time and energy raising funds for the foundation at many regional community festivals. She accepts donations and sells foundation memorabilia to raise money for the cause. She often arranges meet-and-greets at her booth where the public can meet the K-9 dog, talk to its handler and sometimes observe a K-9 unit skills demonstration.

“We do that so people can meet not just the K-9s but can see where the money they have donated goes to,” McNeil said. “We get the chance to thank people because without their support, we couldn’t do all that we do for places like SUNY Cortland.”