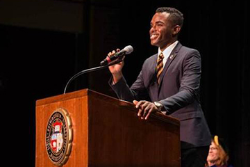 
In the aftermath of the 2014 incidents in Ferguson, Mo., involving accusations of racism and police brutality, Payton Head has stood at the forefront of conversations about improving race relations on campuses and working to create institutional change.

Indeed, his own outspoken protests of his personal experiences of racism on campus helped bring down a university chancellor.

Head is the former president of the undergraduate student government representing nearly 28,000 students at the University of Missouri. On Aug. 9, 2014, an 18-year-old African American man, Michael Brown, was shot to death by police in the St. Louis suburb of Ferguson. The event helped launch the current national debate about race relations and police brutality.

Head, who has recently graduated from University of Missouri with a degree in political science and black studies, will discuss “Lessons from Mizzou” on Wednesday, Oct. 26, at SUNY Cortland.

Head will begin at 5:30 p.m. in Old Main Brown Auditorium. The talk, which is free and open to the public, is presented by the College’s Voice Office and Multicultural Life and Diversity Office.

Head’s viral Facebook post detailing his experience with racism at Mizzou, in conjunction with other incidents, ignited the student body to fight for a more inclusive campus. The discussion on #ConcernedStudent1950 led to campus protests that resulted in the resignation of both the University of Missouri chancellor, R. Bowen Loftin, and the president, Tim Wolfe.