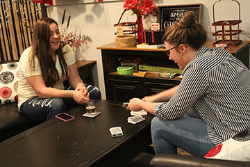 
By day, they looked exactly like other SUNY Cortland employees.

But by night — one night at least, May 30 — they gathered after work at the Finger Lakes Tasting and Tap Room downtown and revealed themselves for who they really are: loyal alumni of the institution that now issues their paychecks.

It’s not a small group. Alumni make up about a quarter of the College’s roughly 1,000 full-time employees.

“It’s a little odd, actually,” said Linda Tillotson Foster ’88, currently field placement coordinator for the Field Experience and School Partnerships Office. “I graduated in 1988 from Cortland and I came to work here in August 1988. And I’ve been here ever since.”

Tillotson was one of a couple of dozen alumni employees who attended the May 30 event, organized by the SUNY Cortland Alumni Association in appreciation for all that these particular graduates do for the institution and its students. The association has even created a new alumni interest group for them called ACE (Alumni Campus Employees).

“ACEs are an important part of our winning hand,” said Erin Boylan, executive director of alumni engagement. “They have made their alma mater their career. They have amazing alumni networks that they can promote to the betterment of the College. They have literally given their daily work to supporting their College and their efforts are very impactful.”

The College at last count employed at least 282 people who earned a Red Dragon sheepskin at some point in their lives. Although their numbers are many, alumni employees don’t necessarily know who among their fellow workers graduated from SUNY Cortland.

That’s where the idea for the ACE gathering came from. For several hours after work that Thursday, ACE members both recent and from decades ago discovered one another over drinks, snacks and giveaways.

Although Jonathan Bogia ’16, a residential hall director at DeGroat Hall, has his bachelor’s degree in secondary social studies and has almost finished his master’s degree in adolescent literacy, at this point in his career he is deciding between various college administrative roles, including remaining in residential life and housing, student conduct or multicultural life and diversity.

“We’ll see what happens. I’m here for the ride,” Bogia said. “I like what I’m doing right now. It’s only my second year as a hall director and I want to get rid of my student loans as much as I can.

“It’s become kind of more so my home than where I actually grew up, because this is where I’ve spent most of my adult life,” Bogia said of Cortland. “I didn’t think in coming to college that I would end up staying in Cortland for seven going on eight years.”

Foster, who has been working full time at SUNY Cortland for more than three decades, began her campus career soon after graduating with a degree in economics and then landing a job as director of accounts payable for her alma mater. In 2002, she earned a graduate degree in health services management and appeared ready for a major career shift.

Instead, she stayed at Cortland.

“I decided I wanted to work for the kids,” Foster said. “The job came up here in Field Placement and I decided to work here.

“I’m a grad from here, I work here and my son goes here — he’s named Joseph and he’s a senior in political science — so I can cover the whole gamut.”

She finds it rewarding to be a Cortland alumna placing student teachers in school districts.

“No matter where I talk with people throughout the state, they have a tie back to Cortland,” Foster said. “Whether they’re a grad, their coworkers are grads, their children went here, or are grads. You talk about conversation starter!”

“Our employees have the closest connections with our alumni,” said Reardon, who recently began as SUNY Cortland’s deputy Title IX coordinator.  “So we always want our employees to let us know when things happen with our alumni. When an alum can connect — not only with the educator aspect but the alumni connection — it’s much  more meaningful.”