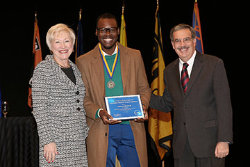 
Three SUNY Cortland seniors and one recent graduate were honored with the State University of New York’s top student awards in Albany, N.Y., on April 5.

The College’s recipients of the 2016 SUNY Chancellor’s Award for Student Excellence are:

This award is given each year to students from SUNY’s 64 campuses who have demonstrated academic excellence while balancing leadership roles, campus involvement, community service and achievements in the arts, athletics and/or career related pursuits.

Along with this year’s honorees, 80 SUNY Cortland students have earned the Chancellor’s Award for Student Excellence since the program began in 1997.

The College’s 2016 honorees go beyond expectation.

Here’s a more in-depth look at each 2016 SUNY Cortland recipient:

Daugherty was apprehensive as the first person in her family to attend college and concerned about the challenges she would face. Her fears did not hold her back from soaring in her studies and taking advantage of many opportunities the College has to offer, including service as Student Activities Board (SAB) club president, resident assistant, Judson H. Taylor Leadership House manager, teaching assistant, tour guide and orientation assistant.

Daugherty’s success began with an SAB meeting she attended her first year of college.

“I found my second family there and they have really helped me to grow as a person,” Daugherty said.

She takes great pride in her work as RA and Leadership House manager. Residence Life and Housing helped her to find comfort in transitioning to a college environment, and she continues to return the favor with her own residents.

Daugherty earned a spot on the Dean’s List and President’s List every semester. She was inducted into the Cortland chapter of the national interdisciplinary honor society Phi Kappa Phi and was recognized for her campus leadership with the Outstanding First Year Student Award, an Outstanding Student Leader Award and the Excellence in Leadership Award.

Daugherty plans to pursue a master’s degree in student affairs. She also has advice for her classmates.

“No matter what, passion is key,” Daugherty said. “Anyone who asks me how to get more out of their experience here, I tell them ‘Think about what they want to do and enjoy doing it.’”

As a Cortland native who lived in town, Davis took a front row seat in campus life.

The dual political science and communication studies major soon became familiar with campus community members for his involvement in the Cortland Christian Fellowship Club (CRU), serving as president and treasurer. He immersed himself in intramural leagues and club tennis, tutoring, serving as a teaching assistant for COR 101 and as a senior tour guide.

“I had the best of both worlds,” Davis said. “I recommend to any local student to get involved in clubs, organizations and jobs on campus. Unless you do, you won’t develop those college experiences and make new friends.”

Davis said joining CRU helped him to find his niche on campus, and helped guide him along his college career. With the organization, he became more active in the Cortland community leading bible studies at various local churches and participating in Loaves and Fishes by serving hot lunches to those in the community in need.

According to Davis, his beliefs encouraged him to persevere and succeed in and outside of the classroom despite any challenges he faced.

“Knowing what you believe in and how you believe helps a lot to overcome that,” Davis said

For his determination and success as a political science major, Davis was recognized with the William Rogers Memorial Award for Excellence, presented to the student with the highest grade point average (GPA) in political science.

He is currently interning for The Heritage Foundation in Washington, D.C., and plans on pursuing a master’s degree in public administration.

Destinvil is not afraid to hold back his ambitions or his voice on campus.

He has been actively involved in promoting diversity within the community, which has included creating and directing two short PSAs called #Don’tBoxMeIn, a campaign to dispel common stereotypes.

“College is all about where you fit in and Cortland is great when it comes to inclusion,” Destinvil said. “Everyone here has always supported me.”

Destinvil, a political science major, has served as an intern for the Multicultural Life and Diversity Office as well as an activist in his role in the Black Student Union (BSU). Last semester, he spoke at both BSU town hall meetings on adding even more inclusion strategies on campus.

At the College, Destinvil also has taken on the position of an undergraduate fellow for the Student Affairs Administrators in Higher Education (NASPA), which has meant attending NASPA conferences and events on behalf of SUNY Cortland. He also assumes the role of building supervisor for the Student Life Center in which he oversees student recreation.

Destinvil has been named to the Dean’s List five times and is a member of the national political science honor society, Pi Sigma Alpha. The Cortland Writer’s Association literacy magazine has published two of his short works, “Father/Son” and “Angel in Disguise.”

The resident assistant and previous orientation assistant credits many of his successes and opportunities to these two positions.

“Being an RA has been one of the biggest blessings of my life,” Destinvil said. “It gave me an idea of what I want to do in my career path.

“I realized the impact I truly had on students in helping them to transition into their college experiences.”

Destinvil will pursue a master’s degree in higher education student affairs at the University of Connecticut.

Scheu had always aspired to play collegiate volleyball until she broke her hand before coming to SUNY Cortland. She did not let that setback prevent her from enjoying the sport at the College and accomplishing even more.

Not only did Scheu play for the women’s club volleyball team, she served as its president, treasurer and secretary.

Finding a balance between school and play is important for Scheu.

“Students should not limit themselves,” she said. “They should take opportunities. It’s important to remember that college is not all work, but to have fun too.”

Scheu volunteered locally for Crown Center for Nursing and Rehabilitation, assisting patients with a range of mental and physical illness, and for the YCWA Aid to Victims of Violence, providing support to individuals who have experienced domestic abuse.

Scheu has maintained a cumulative GPA of 4.16, has made the President’s List every semester and was inducted into the national interdisciplinary honor society Phi Kappa Phi and the international psychological honor society in psychology, Psi Chi. In 2015, she presented a research project on social stimuli at the College’s “Transformations” conference dedicated to student research and creativity.

She credits her professors with helping her advance her academic career.

“The experience and knowledge I have gained from these opportunities has helped prepare me for the future,” Scheu said.

Scheu will pursue a doctorate in clinical psychology.