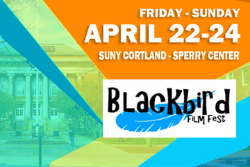 
Cannes and Sundance, move over. A new international film festival — the 2016 Blackbird Film Festival — lands this year in Cortland, N.Y., from Friday, April 22, to Sunday, April 24.

SUNY Cortland will host the inaugural series of professional and amateur films – which is organized and run by students – in the large-screen lecture rooms of Sperry Center, giving both students and Central New York cinephiles an opportunity to absorb as many of the 97 films as they can in a single weekend.

“The festival covers the whole breadth of anything you could want to see. There are some really beautiful cinematic pieces and some thoughtful documentaries,” said Samuel Avery, assistant professor of communication studies and creator of the Blackbird Film Festival.

Filmmakers, cast and crew of the nominated films were invited to participate in the festival and some will attend to talk about their work.

SUNY Cortland is known for its active student body, and the Blackbird Festival will offer plenty of related activities for film fans. Students who attend the festival, for example, will have the opportunity to win prizes over the weekend in several different raffles.

To qualify, film views can pick up festival passports at the event. They can also pick them up in the Student Life Center on Tuesday, from 11 a.m. to 2 p.m.; Wednesday, from 3 to 6 p.m. and Thursday, from 4 to 8 p.m. Festival volunteers will stamp the passports of movie-goers at the end of each movie. Each stamp will qualify as a chance to enter the raffle at the end of the weekend.

Prior to the upcoming weekend, students can enter a “selfie” contest by posting a photo of themselves with one of the Blackbird Film Festival posters around campus to the festival Facebook page. The selfie can also be tweeted @BlackbirdFest. Contestants will be entered in the chance to win a small cash prize and t-shirt.

Communication studies students organized the free festival. They selected the weekend’s offerings from among more than 1,000 entries submitted to the competition from around the world.

Avery worked with 13 student event coordinator interns who recruited sponsors and spent the semester organizing the festival, the first event of its kind at SUNY Cortland. They will run many aspects of the actual festival.

“If you think about it, people this day in age spend a lot of time watching films anyway through YouTube and Netflix. I find that my students really enjoyed watching these films,” Avery said.

The festival begins Friday with a 6 p.m. welcome ceremony in Sperry Center, Room 106, and a two-hour block of film shorts. At 9 p.m. festival goers will head downtown to the official kickoff party featuring the band Big Foot at BRU 64, located at 64 Main St. Partygoers with Blackbird tickets will get a 10 percent discount on food and refreshments.

Starting at 9 a.m. Saturday, the Community Restaurant at 10 Main St. will offer a festival breakfast buffet to moviegoers for $7 per person.

From 11 a.m. until late in the day, participants can choose from among a variety of American and international short films, feature length films and educational workshops.

At 3 p.m., Caley MacLennan will screen “Noon Gun”, a film on police brutality of African American men, and conduct a workshop on how to use social media to promote your film. Avery’s class has already taken note, and leading up to the festival they heavily promoted the Blackbird Festival.

On Sunday, moviegoers can enjoy features from 10 a.m. until the 4 p.m. screening of “Feeling Wanted” that includes a workshop by its creator, Yasmin Mistry, on getting started on one’s first documentary film.

The weekend will be capped with a 6 p.m. award ceremony in Sperry Center, Room 106. Winning filmmakers in different categories will be announced. Two winners will be picked from the selfie contest, one will be chosen randomly and another will be selected as the best Blackbird selfie of the festival. Additionally, winners that participated in the festival passports stamp exchange raffle will be randomly drawn at this time.

The 2016 Blackbird Film Festival brings together a selection of engaging films that tell a variety of stories and address important issues in today’s ever changing world, Avery noted.

For more information, contact Avery at samuel.avery@cortland.edu or 607-753-4099. Visit blackbirdfilmfest.com for more background on the event.