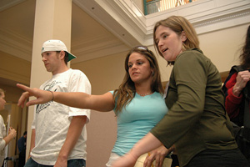 
The 15th annual Scholars’ Day, a series of presentations highlighting faculty, staff and student scholarship and research at SUNY Cortland, will take place in Old Main on Friday, April 15.

This year, the all-day event encompasses 90 different presentations and poster sessions offered by hundreds of undergraduate and graduate students and more than 50 faculty and staff members. The subject matter covers a wide array of academic disciplines at SUNY Cortland.

Scholars’ Day presentations take place in Old Main starting at 8:30 a.m. and continue throughout the day. The event is free and open to the public. SUNY Cortland President Erik J. Bitterbaum has suspended daytime classes to allow the SUNY Cortland community to fully benefit from the lectures and demonstrations. Area high school juniors and seniors and their instructors were again formally invited to attend this year’s event. Complimentary refreshments will be served both in the morning and afternoon in Seminar Room 110.

“Scholars’ Day is a great opportunity for members of the campus community to come together and learn about each others’ work in the discovery of new knowledge that is essential for solving problems and addressing contemporary critical issues,” said Bruce Mattingly, dean of arts and sciences and Scholars’ Day Committee chair. “I believe that those who attend the presentations will be particularly impressed with the number of projects that have involved students as active participants in the process of discovery.”

Among the many topics this year are: sustainable heating at SUNY Cortland using biomass and geothermal energy; the effects of tasting a carbohydrate drink on fuel utilization during exercise; the effects of PCBs on sexual development in rats; the crime victims’ rights movement; the Cortland digital atlas of the historical geography of New York state; how monopoly capitalism stunted the growth of Seneca Falls, N.Y.; and writers read from their work in the Professional Writing Program.

SUNY Cortland graduate James T. Costa, an entomologist and author of Charles Darwin: A Facsimile of the First Edition of ‘On the Origin of Species,’ will deliver the keynote address on “Patience, Industry and a Fair Share of Invention: Insights from Charles Darwin and his Origin of Species” at 11:30 a.m. in Old Main Brown Auditorium.

With his 2009 textbook, Costa, who is executive director of the Highlands Biological Station and professor of biology at Western Carolina University, strives to help readers better understand the historical context, structure and content of Darwin’s masterwork.

“The Origin of Species ushered in a new way of looking at the world, and at ourselves,” observed Costa, who earned his Bachelor of Science in Biology from SUNY Cortland in 1985. “Yet Darwin didn’t set out to be a revolutionary — certainly when, in his early 20s, he embarked upon his voyage around the world on HMS Beagle he accepted the worldview in which he was raised. Reflecting later on his success, Darwin ventured that he had ‘patience … industry … and a fair share of invention.’

“In this talk, I trace Darwin’s personal process of discovery and his strategy in pitching his argument in The Origin of Species, the epochal book he regarded as ‘one long argument.’ Along the way I consider how we might learn from Darwin’s method in the ways we encourage and teach scientific inquiry today.”

Scholars’ Day is supported by the President’s Office, the Provost and Vice President for Academic Affairs Office, The Cortland Fund, the Cortland College Foundation and the Auxiliary Services Corporation. The Student Alumni Association provides volunteers for Scholars’ Day.

For more information, including the complete schedule of events, visit the Scholars’ Day Web page at www.cortland.edu/scholarsday or contact Mattingly at (607) 753-4312.

A native of Long Island, Costa grew up in Plainview, Nassau County. As a student at SUNY Cortland, Costa and his mentor, Distinguished Professor of Biological Sciences Terry Fitzgerald, conducted research on social caterpillar communication. A SUNY Cortland Presidential Scholar, he earned numerous other scholarships and honors, including a Senior Class Award and induction into the interdisciplinary honor society Phi Kappa Phi.

Costa subsequently received a Master of Science in Insect Ecology and a doctorate in population genetics and behavior from the University of Georgia. He completed a postdoctoral fellow in entomology from 1992-96 at Harvard University’s Museum of Comparative Zoology, where he is a longtime research associate in entomology and a former fellow of the Radcliffe Institute for Advanced Study.

Costa joined the faculty at Western Carolina University in 1996, becoming a professor of biology in 2005, the same year he was appointed to direct the Highlands Biological Station.

The author of the 2006 book, The Other Insect Societies ( Harvard University Press), Costa’s special interest in social caterpillars and sawflies has taken him from the southern Appalachian Mountains to Europe and Latin America as he has studied insect social behavior.

He has taught genetics, biogeography, entomology, the Origin of Species, and field courses in Hawaii and the desert southwest. His passion for Darwin and the history of evolutionary biology has led him to the Galápagos Islands several times, where he has lectured on Darwin and evolution, and to England each summer, where he teaches in Harvard’s Darwin program at the University of Oxford.

Costa is working on a third new book that draws on Darwin’s experimental work as a novel way of teaching about Darwin, evolution and the nature of scientific investigation.