A Champion Wrestler Finally Gets His Ring 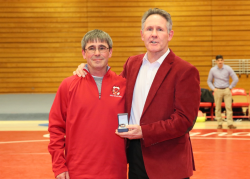 
Troy Monks ’90 won an NCAA Division III national championship in wrestling at 118 pounds 27 years ago. Something, however, was always missing.

At the time, NCAA national champions had to pay out of pocket if they wanted a keepsake ring. But money was tight in the Monks household. His family offered to give him the funds for a ring, but he declined.

“My family gave me the choice and I elected no because of the financial situation,” Monks said. “I didn’t need it. As years went by, it’s been a huge regret of mine. I’ve seen recent guys win the national title and get the ring.”

Monks got the surprise of a lifetime before a meet between SUNY Cortland and Ithaca College on Feb. 15.  SUNY Cortland’s athletic department heard about Monks’ plight and purchased him a ring nearly three decades later. Gene Nighman, Monks’ collegiate wrestling coach, presented Monks with a national championship ring in a brief ceremony.

An emotional Monks had to lift his eyeglasses to dab away the tears after Nighman, currently the Assistant Director of Athletics at Cornell, presented his former wrestler with the ring.

“I didn’t have a clue,” Monks said. “I knew something was up when everyone was here when I walked in.”

“It was a no-brainer that we would sponsor it,” Urtz said. “It was a fun thing to do to celebrate one of our national championships.”

During the regular season, Monks lost just one match to a Division III opponent, St. Lawrence University’s Bob Zoeke. The two met again in the NCAA finals, with Monks prevailing in a 6-3 decision to capture the national title.

It remains one of the highlights of Nighman’s coaching career.

“Troy got a lead and rode him out and just wrestled so smart the rest of the match,” Nighman said. “In the third period, he was on top and he looked at the clock and there were 10 or 15 seconds left. He had Zoeke beat and he took one hand off and gave a thumbs up. He did it. It was just an awesome memory.”

Monks said his national title remains in his thoughts. He had placed fourth at the NCAA tournament as a junior and had dedicated himself to becoming a national champion one year later.

“I don’t think if it wasn’t for the sport itself, I’d be where I’m at, still teaching and coaching,” Monks said. “A lot of that season came from (Nighman’s) help. He put me in the right place. It’s constantly reflected upon and talked about frequently.”

“He was a very, very hard-nosed, blue collar, gutsy wrestler,” Nighman said. “He was just what a coach wants. Every practice, he left everything on the mat. I would push him until he was exhausted. We would do sprints and work out so hard after wrestling for an hour, an hour and a half. He pushed himself so hard and he wanted it so badly.”

On a snowy winter night, Monks finally held a national championship ring in his hands, his supportive family and friends looking on from the bleachers.

“This just adds to it. It adds to it big time,” Monks said. “And knowing I have the support that travelled here for me today and how many people kept this quiet for months on end.”