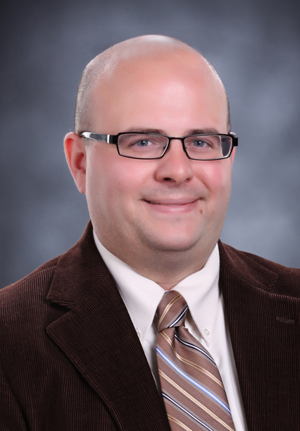 Hanford, who has served as associate registrar since joining the College last Aug. 22, replaced Donna Margine, who left the Registrar’s Office to work on special projects for the College. Hanford reports to Carol Van Der Karr, associate provost for academic affairs.

In his new position, Hanford provides supervision and leadership for the Registrar’s Office, which maintains historical student records, and oversees the development of tasks associated with academic data in SUNY Cortland’s Banner student information system.

The registrar is responsible for a wide range of internal and external reports involving enrollment data and degree certification. He participates in the development of new policies and the integrity of existing academic policies and serves as the Family Educational Rights and Privacy Act (FERPA) officer on campus. Hanford also will serve on College committees and professional organizations relating to his duties.

He has extensive experience with course planning, classroom scheduling and Banner software, having previously served since 2008 as an assistant director in Binghamton University’s Enrollment Management Division. Hanford was responsible for identifying effective and efficient ways of managing student data and processes. In that capacity, he oversaw the support of the Banner student information systems and provided advanced assistance for faculty, staff, students and community members using features of the system. Hanford trained staff and developed Banner materials for the university’s Information Technology Services and the Technology Training Center.

In 2008, he became assistant director after serving one year as student systems specialist in the Provost’s Office at SUNY Binghamton.

From 2005 to 2007, Hanford served as a senior academic advisor in the university’s Harpur College of Arts and Sciences.

He began his career in 2002 as operations manager for three years with Ahold USA Tops in Buffalo, N.Y.

Hanford, who has a Ph.D. in sociology from the University at Buffalo, also has taught sociology and criminology courses for SUNY Cortland’s Sociology/Anthropology Department as an adjunct instructor since 2006.

Binghamton University’s Professional Employees Council honored Hanford with a Distinguished Service Award in 2007. He served as group organizer of the Juvenile Diabetes Research Foundation “Walk for the Cure” from 2002 to 2005.

He is married to Amy Hanford, assistant registrar at Binghamton University. They have an infant son, Michael.