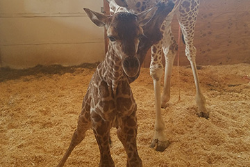 It wasn’t a spouse or relative who went into labor. It wasn’t even human for that matter.

She, in this case, was April the giraffe, who in the past two months has become one of the biggest internet sensations of all time through the live-streaming of her pregnancy. Reigelman happens to work in animal care at Animal Adventure Park, the now-famous Southern Tier zoo where April gave birth.

“I jumped out of bed, got in my car and drove as fast as I could,” said Reigelman, a biology major and aspiring veterinarian who grew up in Johnson City, N.Y., roughly a half-hour from the park.

More than 1.2 million people tuned in live on YouTube, making it one of the top-five most watched live events in the website’s history. Reigelman missed the actual birth by a matter of minutes, but he made it in time to see the baby giraffe’s first steps. He estimates that fewer than 10 people were actually there to see April in person.

“I was right there to see (the baby giraffe) stand up for the first time and start walking around,” Reigelman said. “That was pretty surreal.”

A self-described animal lover for as long as he can remember, Reigelman is a member of the seven-person animal care team at the Harpursville, N.Y., adventure park, which welcomes guests from mid-May through late October. Reigelman’s duties are focused on the 200-plus animals and 70 species that the facility houses – feeding them, grooming them, administering medications and doing anything else that’s asked.

He has tended to cougars, hyenas, lynx, black bears and many more. Arctic wolves might be his favorite, he said.

“All of our carnivores are bottle-raised, so we have a deeper connection and a developed trust with them,” Reigelman said. “Really, I just like to help animals … make their lives better.”

He took a chance in 2015 and applied for a summer job after his sophomore year at SUNY Cortland, telling Animal Adventure Park owner Jordan Patch about his goal to be a veterinarian.

“I think (Patch) just saw my passion and wanted to help me progress,” said Reigelman.

Reigelman said he felt the same excitement and support from his professors at SUNY Cortland in courses like vertebrate biology, field biology and anatomy and physiology. He studied birds in an ornithology course with Professor Steven Broyles and described a time when Broyles pulled a van over on the highway just to teach his student passengers about a bird flying overhead.

“That might sound crazy, but it’s so cool to me,” Reigelman said. “That sort of stuff inspires you as a student.”

Reigelman also studied abroad during a two-week winter session in Belize, where he took a wildlife health conservation ecology class taught by a wildlife veterinarian. During his spare time, he assisted the professor with amputations and other medical procedures. He drew blood from pelicans and jaguars.

“Coming to Cortland for its biology program was the greatest decision I ever made,” Reigelman said.

He specifically recalled a time during his first semester as a freshman when Professor Peter Ducey invited students to his office to discuss their career paths, an invitation that Reigelman accepted.

“Dr. Ducey isn’t my advisor, but he took on an advisor’s role that day,” Reigelman said. “He recommended courses I should look into taking. It got me excited about being here at Cortland, especially that a professor would care that much about his students and help them in that way.”

“Because Lucas has such a deep curiosity for animals and many aspects of biology, he’s taken a very impressive range of biology courses and he’s gone far beyond the minimum requirements for his degree,” Ducey said. “His enthusiasm and growing expertise are obvious in every class.”

Reigelman couldn’t have imagined as a freshman that before he graduated he would earn a front-row seat at one of the largest internet spectacles of his lifetime – one that attracted 232 million views since early February and one that aligned so perfectly with his passion for animals.

He said he’s prepared for a busy summer of work and pursuing the next steps towards veterinary school.

“The goal is to continue building my credentials,” Reigelman said. “And I’m hopeful that there will be more experiences like this one.”