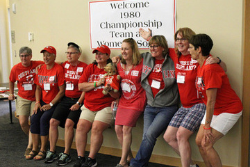 
Cydney Archer Scarano '81 and her husband, Marty Scarano, drove more than seven hours to Cortland from their home in New Hampshire to make it to Alumni Reunion 2017.

The road trip was a reminder of why Archer Scarano came back to campus. Nearly four decades ago, she and 15 of her women's soccer teammates drove 1,700 miles in 40 hours to lead the Red Dragons to the nation’s first intercollegiate women's soccer championship in 1980.

That historic journey was celebrated at Reunion on July 8 with the premiere of a 66-minute documentary, “Cortland to Colorado,” that celebrated the championship team and its role in the growth of women's soccer in the United States.

“The life lessons are almost more relevant today than they were in 1980,” said Archer Scarano. “The coaching, the leadership, the camaraderie, the commitment to the game, the determination, all the things it takes to be excellent at what you do, we had all of those ingredients. As teachers and coaches today, now we’re the elders and the ones with the wisdom and we need to share that with the people we’re mentoring and teaching. I’m hoping that we can take this documentary and pay it forward. We can use it as a teaching tool.”

The 1980 Cortland women’s soccer team thought their season was over after vanquishing Princeton, Harvard and the universities of Vermont and Connecticut to win the Association for Intercollegiate Athletics for Women regional title.  The NCAA did not sanction women's soccer until the 1982 season, and there were no divisions based on the size of schools’ athletic budgets.

Steve Paul, then the women's soccer coach at Colorado College, had other ideas for the Cortland squad.

Paul, a women’s collegiate soccer pioneer, created an invitational postseason tournament, outside of the AIAW, to bring together seven of the best women's soccer teams from around the country. The initial field for that 1980 tournament included Cortland as well as Colorado State, Harvard, Northern Colorado, Texas A&M, UCLA and the University of North Carolina.

The surprise, last-minute invitation forced SUNY Cortland officials to make a tough decision. Head coach Anna Rush '57 determined that the team should accept the invitation but also concluded that airfare to Colorado Springs wasn't in the budget. With the tournament set to begin just days away on Nov. 14, driving seemed out of the question, unless the team left right away.

That’s exactly what they did.

Before they hit the road, Rush made the tough choice of selecting her top 16 players from a 25-woman roster, leaving nine on campus. The team then piled into a pair of red vans and hit the road.

There were plenty of challenges along the way. It was a cold and snowy drive through the Midwest to the Rocky Mountains. The players split driving shifts and sang to one another to stay awake during the middle of the night. An envelope filled with $2,000 — the team’s lifeline for lodging and food and fuel — was accidentally left on a gas station counter in Kansas. The players quickly realized their mistake, turned around and recovered the envelope and its contents, untouched.

Once in Colorado, the Cortland women didn’t miss a beat on the pitch. The Red Dragons kicked off the tournament with a 3-0 win over Colorado State, setting up a semifinal showdown against rival Harvard. The Harvard players had flown to Colorado, raising money selling birthday cakes to classmates, and some of their players complained of tired, jet-lagged legs. Cortland players, after their grueling cross-country trek, weren’t sympathetic. They handed the Crimson a 3-0 loss and advanced to the national championship game and a matchup with UCLA.

Women’s soccer at the varsity level was relatively new at UCLA, as it was at many colleges in 1980, but the UCLA brand was one of the biggest in college sports at the time thanks to the success of its men’s basketball and football teams. This was a David and Goliath type of game for the SUNY Cortland women.

After overhearing some of the UCLA players mention they had never seen snow before, the Cortland women knew they had an edge over their sun-drenched counterparts.

The Red Dragons left no doubt as to which team was the nation’s best, beating UCLA 5-1 to capture the first American title of its kind.

To this day, when members of the 1980 women’s soccer team gather, they wear custom-made bright red t-shirts with white lettering. On the front, the shirt reads “Where is Cortland?” On the back, “Ask UCLA.”

After a long drive back home, the two red vans first encountered the Cortland Police Department and thought they were being pulled over. Instead, the lights and sirens were part of an escort down Main Street and back to Park Center, where they were mobbed by classmates and members of the Cortland community. The first to meet them were the nine teammates who had been left at home.

The members of the 1980 team and Rush share their memories of that journey throughout the film. However, the story of the Cortland championship team is also told through a national perspective. Abby Wambach, a Rochester native, two-time Olympic gold medalist, a member of the 2015 U.S. Women's World Cup-winning team and an NCAA Division I champion at the University of Florida, shared her thoughts on how the 1980 Cortland team set the foundation for women’s soccer in the United States.

University of North Carolina head coach Anson Dorrance, who coached in the 1980 national tournament in Colorado Springs and has since led the Tar Heels to 21 NCAA Division I titles, appears in the film. Bob Scalise, the current director of athletics at Harvard and the women’s soccer coach there from 1977 to 1986, is also one of the key interviewees.

“We started to realize this story was way more than Cortland,” said team member Leslie Archer ’83, Archer Scarano’s sister. “As we started to bridge all of this information together, it started getting really interesting to us. We decided to go with it and invite these other teams to have a say.”

The film was produced and directed by Joe Calderone of InItIIWinIt Productions, a Saratoga Springs, N.Y.-based video production company focused on athletics.

“I’m just honored that you let me tell your story,” Calderone said to the players, coaches, families and friends assembled in SUNY Cortland’s Sperry Center after the premiere. “What made this documentary, honestly, you guys made the story. You won the national championship and you made history. You were amazing on camera and you were so much fun to work with.”

Future distribution of the film remains in the planning stages. There are hopes to air it on PBS affiliates in central and western New York as well as showings at film festivals and the 2018 National Soccer Coaches Association of American annual convention in Philadelphia.

A trailer for the documentary and a roster and photos from the 1980 season are presented online at tworedcortlandstatevans.com.

“We really think this is a pure, innocent and fun and also positive story in sports and it’s so hard to find those today,” said Leslie Archer. “This is really how it started.”

Calderone had worked as a sports anchor at Your News Now in Albany and knew Leslie Archer professionally from her time coaching girl’s soccer at Shaker High School in Latham. The two met at the Latham ’76 Diner and Archer shared the story of the 1980 Cortland women’s soccer team. Calderone was hooked, and the idea for a documentary was born.

Calderone interviewed members of the team when they got together in Cortland during Alumni Reunion 2014. Interviews with titans of the game like Wambach and Dorrance, who made himself available after a UNC road game at Syracuse, helped put Cortland’s achievement in perspective. A little bit of comedy from class clown Lisa Langworthy ’82 and photos pried out of scrapbooks put the finishing touches on the remarkable story of the 1980 season.

Hours before the documentary was screened, members of the team gathered for an alumnae game on Holloway Field. When head coach Anna Rush arrived, players stormed over to greet her. Smiles were all around but the hugs would have to wait until Rush could make her away around the fence surrounding the field.

Following the screening, team members presented Rush with a Pioneer Award. Rush had never played soccer or coached it prior to her appointment as coach in 1978. She was not a master tactician — assistant coach Ron Hanson was the team’s game plan expert — but Rush inspired the team through her ability to listen and manage a group of young women.

Leslie Archer read the following inscription on the Pioneer Award vase: “For her unwavering dedication, guidance, patience, love and innovative coaching style that helped change the landscape of women’s soccer, thank you momma Rush for believing in us all the way to Colorado and back. Love, the 1980 championship team.”

Decked out in their red “Where is Cortland?" T-shirts, members of the team gathered around to share even more memories and snap a few photos once the film was over. It was clear, all these years later, that they had not only put Cortland women’s soccer on the map, but they had set the foundation for the beautiful game in the United States.

Millions now tune in each time the women’s national team takes the field in Olympic and World Cup competition. Thousands more have had the opportunity to play women’s soccer at the collegiate level thanks in large part to the exploits of an underdog team from upstate New York.

When Archer Scarano first became a member of the SUNY Cortland women's soccer team in 1976, it was still a club sport.  By 1978, the team had a new head coach, Rush, and was elevated to varsity status. As a varsity team, the Red Dragons were dominant from the start. The 1978 team went 11-0 and outscored its opponents 132-2.

That season put Cortland women’s soccer on the map. The team started seeing talented players transfer to Cortland and became a destination for the top high school players from across upstate New York.

SUNY Cortland scheduled tougher opponents and went 10-1 during the 1979 regular season. It was one of eight colleges to qualify for the AIAW eastern championships at Brown University in Providence, R.I.

With wins over Pennsylvania State University and St. John Fisher College, SUNY Cortland advanced to face Harvard University in the 1979 AIAW eastern championship game. Cortland and Harvard were tied 1-1, in overtime, when game officials decided to suspend it because of darkness.

The Cortland women declined to take championship medals for their participation in the tie match. The title game draw only fed the competitive fire of the players as they began to prepare for the next season.

A year later, in 1980, the Cortland women went 9-3 in the regular season and qualified as the No. 8 seed in an eight-team AIAW eastern championship tournament. In the opening round, the Red Dragons knocked off top-seeded Princeton 2-0 in a Nov. 5 game on the Princeton campus, setting up a semifinal rematch with Harvard three days later at the University of Vermont. Cortland won that game, 2-1, and then defeated the University of Connecticut, 5-2, on Nov. 9 to capture the AIAW eastern title.

The Red Dragons returned to campus and celebrated, thinking their season was over.  Then they received their fateful call from Colorado.

Now, the members of that 1980 Cortland women’s soccer team hope their story can be a lesson to anyone willing to listen. If you’re willing to work hard and follow your dreams — even if that dream is 1,700 miles and 40 hours away — anything is possible.

“This lesson, to me, this is what we do at Cortland,” Archer Scarano said. “We teach how to teach. We teach how to develop young people to be excellent in whatever they do. This is so important.”

The film is available online at CortlandtoColorado.com.