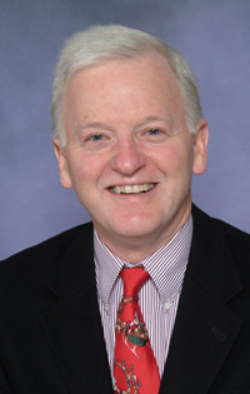 
Douglas DeRancy ’75, M.S.Ed. ’86, who served SUNY Cortland for 26 years in alumni affairs and fundraising executive positions, retired on May 31.

He was designated as director emeritus of alumni affairs and assistant emeritus to the vice president for institutional advancement.

During his tenure with the College, DeRancy worked tirelessly and without fanfare to establish beneficial relationships with SUNY Cortland’s 68,000 alumni, according to colleagues. His years of visits and the friendship he established with John M. Fantauzzi ’58 developed into a $6.5 million gift that provides dozens of scholarships for current and future deserving young students wanting to attend SUNY Cortland. His consistent, concerned, friendly and honest approach with alumni defined “friend-raising” at its best.

DeRancy was involved closely in the 2003 acquisition of a stately mansion on Tompkins Street from Charles Gibson, and its subsequent opening as a bed and breakfast and venue for major campus events and countless alumni get-togethers. DeRancy spearheaded the major fund drive among alumni, faculty and friends that established a $1.7 million endowment to support the house’s upkeep. The generosity included a $1 million gift from an alumna who became the namesake for the Lynne Parks ’68 SUNY Cortland Alumni House.

Since 2009, DeRancy has served as the assistant to the vice president for institutional advancement, a position that was created as the College undertook “Educating Champions: The Campaign for Cortland,” to raise $25 million among alumni, friends, faculty, staff and corporate partners by 2013. DeRancy has played a key role in the initiative.

From 1999 until 2009, he was executive director of alumni affairs, providing leadership and direction for the College’s Alumni Affairs Office and the Cortland College Alumni Association, Inc. As the principal liaison for the College in matters affecting alumni, he served as the alumni association’s executive secretary. He also assisted with major gift development on behalf of the Cortland College Foundation, Inc.

DeRancy joined the College in 1986 as director of alumni affairs. He was a member of the Alumni Association’s Board of Directors the two previous years. As director, he oversaw meetings, events, programs and services to an alumni base that was then 27,000 alumni strong. He also fulfilled key fundraising duties for the College.

DeRancy was promoted to director of alumni and foundation affairs in 1989. While managing day-to-day operations of alumni affairs, he oversaw an annual fund office as it grew into a full staffed annual giving program and the Cortland College Foundation, which he served as executive director for 10 years. During this period, he established the College’s first major gift and planned giving programs. Under his leadership, the foundation in conjunction with the alumni association totally reorganized the gift-giving program to designate the foundation as the lead entity for College fundraising. The reorganization established the successful structure for supporting the College’s first-ever capital campaign, which in 2003 successfully reached its $10 million goal.

In 1999, in the midst of the division’s expansion and reorganization, DeRancy returned to the full-time executive director of alumni affairs, responsible for overseeing the alumni affairs operation and working with major donors. He served for many years on the College’s C-Club Board of Directors, helping to lead a volunteer alumni group that promotes and supports athletics and hosts the C-Club Hall of Fame and Classic Teams weekend events.

Before working for SUNY Cortland, DeRancy was executive director of the Cortland County Youth Bureau for 10 years. After he resigned, he continued to participate in the City Youth Bureau’s advisory board for many years.

DeRancy and his wife, Deborah, live in Scott, N.Y. They have two grown children, Rachel and Daniel.