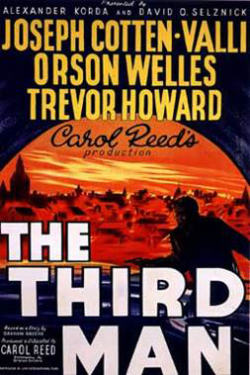 Presented by the College’s Project on Eastern and Central Europe (PECE) and the History Department, the movies depict the World War II aftermath, also known as “Europe — Year Zero,” set amid the rubble of postwar Europe. They are intended to engage students and colleagues across the College, whatever their background or discipline.

One of the great thrillers of film history,  “The Third Man” was selected by the British Film Institute as the number one British Film of the 20th Century.

Starring Orson Welles, Trevor Howard and Joseph Cotten-Valli, the flick is set in a bleak post-1945 Vienna during the period of four-power occupation.

“It shares with the other films in our Rubble Film series a bleak vision of post-war Vienna,” Steck said. “Here is occupied Vienna living with the rubble of the war, with people adrift in the war’s aftermath, with black market and deep corruption, and with early signs of Cold War tensions. “

Welles and Cotten-Valli play two Americans — the one hopelessly naïve, the other hopelessly corrupt and cynical.  The scene is set with these opening words from Holly Martens (Cotten-Valli):  “I never knew the old Vienna before the war, with its Strauss music, its glamour and its easy charm.  I really got to know it in the classic period of the Black Market.  Boots, stockings, cigarettes and watches exchange hands. They could get anything if people wanted it enough and had the money to pay.”

And, he might have added, human life counted for very little. “The Third Man” remains an iconic film of this period of rubble, espionage and corruption and perhaps resonates with film buffs that might answer a recent New York Times ad for a Berlin-Vienna “espionage” tour where travelers tour key sites from “The Third Man.”

“‘Rubble’ is also a metaphor for the damage to people and societies and for the chaos and uncertainty that shaped their shattered lives,” Steck said.

“The films were not only set in ‘rubble’ but were often made by filmmakers working in conditions that gave their films an authentic and gritty realism,” Steck said. “And beyond their historical and cinematic importance, the films provide an opportunity for audiences to reflect on the reconstruction of war-torn and occupied countries more generally.”