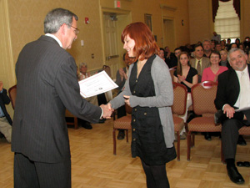 
SUNY Cortland’s Institute for Civic Engagement is accepting nominations for its 2014 leadership awards as well as applications for eight scholarships tied to community service.

College students, faculty and staff members, and community residents can submit nominations for others or themselves by completing the form under the Leadership in Civic Engagement Awards heading on the left side Institute for Civic Engagement Web page at cortland.edu/get-involved.

Nominations, which will be reviewed by a committee made up of SUNY Cortland students, faculty and staff members, and community residents, will be accepted until Friday, March 7.

Additionally, applications for eight civic engagement scholarships totaling between $1,000 and $2,000 are being accepted online at cortland.academicworks.com. Both graduate and undergraduate students who will return to the College for the 2014-15 academic year for at least one semester are eligible to apply.

The application deadline for those awards, which can be found by searching “community service” on the scholarship Web page, is Saturday, March 1. Students should pay close attention to scholarship requirements, such as minimum grade point average.

Contact the College’s Institute for Civic Engagement at getinvolved@cortland.edu with any questions about the awards nomination or scholarship application process.