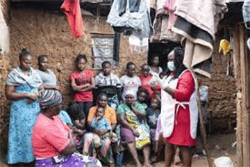 Yet it’s an intriguing thought that opportunity can be pulled out of the pandemic in an always desperately poor and medically underserved corner of the world.

Ben Wodi, a SUNY Cortland professor of health and 37-year faculty member, reasons that the developed world would be foolish to continue ignoring the underlying healthcare disparities igniting contagion in poor countries — which can easily spread elsewhere.

“The world will not fully rid itself of this pandemic as long as the agent finds refuge in regions like sub-Saharan Africa with significant vulnerabilities,” said Wodi, who specializes in community health and has coordinated public health-related study abroad trips to developing countries for generations of students.

Wodi will discuss “Global Public Health: Impact of the COVID-19 Pandemic in Sub-Saharan Africa — Challenges and Opportunities,” during a virtual lecture at 5 p.m. on Tuesday, April 6. To attend, visit the Webex site at the time of the event.

His talk, which represents the 13th Charles N. Poskanzer Lecture sponsored by the SUNY Cortland’s Health Department, is free and open to the public.

The event is supported by the Charles N. Poskanzer Fund, an endowment named in honor of the late SUNY Distinguished Service Professor emeritus who taught in the university’s Health Department for 40 years.

“Although the African region makes up about 17% of the global population, it appears to account for about 5% of confirmed cases and 3% of the COVID-19 pandemic deaths thus far, in spite of earlier pessimistic predictions,” said Wodi, referring to data from the World Health Organization.

The lower attack and case fatality rates may be due to a different mode of transmission, “herd immunity,” from prior exposure to other corona viruses, limited testing and reporting of fatalities, unfavorable environmental conditions, and a younger and less vulnerable population, he said.

“However, the public health and socioeconomic impact of COVID-19 will linger in the region for the foreseeable future,” Wodi said.

Nations that adhere to public health measures such as vaccination, higher levels of sanitation/personal hygiene, social distancing, increased use of face coverings, testing, isolation, contact tracing and treatment, fare better at controlling the incidence of the contagion, he noted.

“These are practices that have not worked well in Africa due to political, cultural and socioeconomic vulnerabilities,” Wodi said.

“Conversely, the COVID-19 pandemic presents an opportunity for Africa — especially the sub-Saharan region — to begin improving on these areas of vulnerabilities,” Wodi said. “These could include the lessons gleaned from managing the Ebola epidemic, HIV/AIDS pandemic, malaria, tuberculosis, as well as adapting to local methods in community engagement.”

His research on communicable disease epidemiology has been published and presented extensively on a regional, national and international level. Wodi has focused in particular on the determinants of excess morbidity/mortality in sub-Saharan Africa. He is a frequent published author and presenter on the epidemiology of HIV/AIDS in sub-Saharan Africa.

He is currently collaborating with colleagues at the University of Port Harcourt, Nigeria, on a report of Assessing and Implementing the United Nations’ Millennium and Sustainable Development Goals, 2000-2030.

Wodi has given speeches on the public health significance of climate change, the Ebola epidemic in sub-Saharan Africa, and conducted a town hall meeting on HIV/AIDS in Kenya and Nigeria. He has mentored emerging professionals on behalf of the American Public Health Association.

He serves on an international scientific advisory board to the World Bank-sponsored African Center for Excellence for Public Health and Toxicological Research at the University of Port Harcourt, Nigeria.

Wodi served as visiting professor of public health at the University of Port Harcourt, Nigeria, where he consulted and researched public health issues including the establishment of a Master of Public Health program. Additional public health outreach initiatives took him to Dakar, Senegal, The Gambia and Belize, Central America.

He played a key role in the transition of Cortland’s health science degree curriculum to community health and the subsequent program accreditation by the Council on Education for Public Health.

Toward internationalizing the curricula at SUNY Cortland, he served on the American Council on Education’s Internationalization Laboratory from 2007 to 2009.

Wodi served as vice chair on the Cortland County Legislature’s Environmental Management Council to successfully have the EPA designate the Cortland Aquifer — which runs from Cortland to Homer and Preble — as a Sole Source Aquifer System, to protect Cortland’s only water source from pollution. He then helped develop a 1998 data management system to cross reference well locations.

The Poskanzer fund was established through the Cortland College Foundation as an endowment to support an annual, public lecture offered by the university’s Health Department in honor of its retired colleague. Wodi hosted the inaugural lecture. Poskanzer died in 2010. The annual lecture, which was not held last year due to the COVID-19 pandemic, allows the Health Department to bring national leaders in public and community health to campus to meet with students and faculty and to deliver a public lecture on a current public health issue.