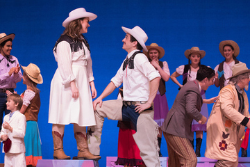 
It all led up to this: in an off-Broadway theatre, with talent scouts and agents in the audience, students showcased their past four years of study in SUNY Cortland’s Performing Arts Department.

A number of the College’s current musical theatre major seniors — Caroline Anderson, John Cavaseno, Liz Earle, Matt Henningsen and Kaitlyn LaGrega — took their talents to the stage of the Jerry Orbach Theatre in midtown Manhattan as part of SUNY Cortland’s musical theatre showcase on May 2. They performed in front of show business talent scouts and agents, hoping to land a role that will launch their careers.

The showcase acts like a job interview for students looking to work in theatre.

“I love dancing and acting and singing and art and telling stories and this is the perfect combination of all of them,” said Cavaseno, of Syosset, N.Y. “Doing it just makes me happier than doing anything else, so the fact that there’s a career where I can get paid to do it is like the best.”

The students have been preparing for the showcase throughout the spring semester. In their performance class, the students picked out songs that would show off their voices to hopefully catch the attention of prospective agents. The pressure was on in this final performance, which could help decide the students’ futures, but they handled it with poise and confidence.

“Having an agent is very important to starting in the business because they can send you on auditions or recommend you to theatre companies,” said Cavaseno. “To succeed in this business, you have to want it more than anything else and drive yourself to success.”

Each student performed a solo song, as well as duets and group numbers. Many of them displayed other talents including acrobatics, piano and dancing.

A similar event was held at the Orbach Theatre in May 2017 and the Performing Arts Department intends to make this an annual event.

An encore performance of the senior showcase was held on campus on Friday, May 17 in the Dowd Fine Arts Center.

Alumni Hailey Aviva ’16, Will Rivera ’15 and Chloe Solan ’18 were invited to perform alongside the members of the class of 2019.

Matthew Clark, SUNY Cortland’s associate vice president for Institutional Advancement was in New York the day of the showcase and he stopped by to see what it was all about. He said he was blown away by what he witnessed.

“What I would really like to do is continue to raise the profile for this program because it illustrates how comprehensive this university is and I want the rest of the world to know that,” Clark said. “The arts really lend a lot to the fabric of the experience here.”

SUNY Cortland has been named by OnStageBlog.com as one of the top five most underrated theatre colleges in the Northeast.

Cavaseno and Henningsen already have jobs lined up for the summer. Cavaseno will be performing in “West Side Story” and “Joseph and the Amazing Technicolor Dreamcoat” at the Tibbits Opera House in Coldwater, Mich. Henningsen will dance and act in “Unto These Hills” at the Cherokee, N.C. Mountainside Theatre. They will keep auditioning and hope that the showcase will help build their professional network in New York.

“Trust the process, never give up,” said Henningsen, of East Northport, N.Y. “You have to find your own path and it’s not going to be the same journey as anyone else’s.”