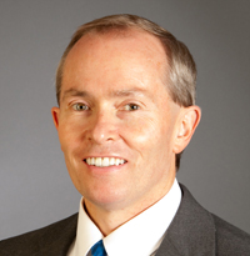 
Robert D. Hofmann ’82, who led Vermont’s largest government department and moved seamlessly between executive roles in the private and public sectors, will become the 13th inductee into the SUNY Cortland Academic Hall of Fame.

Hofmann of Waterbury Center, Vt., now the senior vice president and senior operations officer of Union Bank in Morrisville, Vt., will be recognized on Thursday, April 3, when he addresses the President’s List reception, an event honoring the College’s students who achieve grades of A-minus or better in each of their courses for a given semester as well as meeting other academic performance criteria. SUNY Cortland President Erik J. Bitterbaum will open the event, which will honor 408 students this year. The reception begins at 4 p.m. in the Corey Union Function Room.

Last year, the College honored William Richards ’88, an executive director of discovery research in the Metabolic Disorders Department at Amgen, Inc., and a leading researcher of novel therapeutics in areas including diabetes and cardiovascular and kidney diseases.

This year, Hofmann will be recognized based on a remarkable career in which he merged public and private sector service, reflecting the kind of diversity and flexibility graduates need to embrace in today’s economy.

“Your record serving the state of Vermont demonstrates a sense of integrity and commitment to the public good,” stated R. Bruce Mattingly, dean of the School of Arts and Sciences, in a letter to Hofmann announcing the recognition. “We hope our students show equal interest in advancing their communities through the work of government.”

From 2008 to 2011, Hofmann was secretary of human services for the State of Vermont, managing the state’s largest, most complex division. In that role, he managed nearly half of Vermont state government. Hofmann led more than 3,000 employees through a tumultuous period, confronting unprecedented budget reductions while maintaining and enhancing critical operations. He addressed a wide-range of issues that included child abuse, hunger, homelessness, health care, client benefits, H1N1 Flu and corrections reform.

Previously, he had been the state’s commissioner of corrections, a post he accepted in 2005 after serving Vermont’s commissioner of finance and management, since 2003. After overseeing the state’s multi-billion dollar expenditures and revenues, Vermont’s governor had asked him to tackle the Department of Corrections, which was then widely called the toughest job in Vermont state government. Hofmann said that he accepted, knowing he didn’t have the typical law-enforcement background.

As the chief executive officer of Vermont’s prison system, Hofmann applied a commonsense approach to address volatile issues such as prison overcrowding, security risks, staff safety and offender recidivism. During his tenure there, the correctional officer attrition rate dropped dramatically even as he led 1,100 employees through major operational restructuring.

“If I could rewind the tape, I would do it all again,” Hofmann said, looking back on his unique career. “I would go to Cortland, I’d go to business school. We don’t know what the future’s going to hold for us in a career. One door shuts, another door opens.

“There are benefits to specialization but also to having a broad educational experience,” he said. “That has worked out well for me. It’s the generalist nature of my background that’s allowed me to adapt to a variety of career opportunities.”

His five years with American Express in New York City, from 1985 to 1990, also were marked by steady professional progress in various marketing roles, eventually becoming director of lodging-marketing in 1988.

Hofmann was first introduced to the corporate world was as a business analyst with Dun and Bradstreet in New York City a few months after college.

As a student at SUNY Cortland, he spent a semester in London, earned numerous awards and scholarships and served with Joyce Hall '82 as the Didaescaleon yearbook co-editor-in-chief.

He completed a three-year program in optimizing customer profitability with the Stonier Graduate School of Banking in 1999.

Hofmann is a board member of Vermont Public Television, the Vermont Technology Council and ReBuild Waterbury. He is a former board member of the Vermont Housing Conservation Board, the Vermont State Retirement Fund and Vermont Chamber of Commerce. He graduated from the Leadership Champlain program. From 1988 to 1992, he served his alma mater on the SUNY Cortland Alumni Association Board of Directors.

He has dual citizenship in the U.S. and Ireland, speaks German and has completed 10 marathons. He enjoys travel, genealogy and hiking.