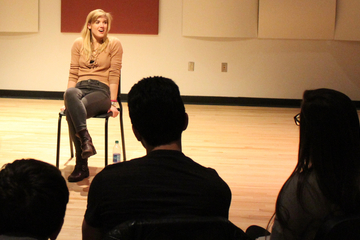 
Many of SUNY Cortland’s musical theatre majors face a daunting challenge after Commencement. They move to New York City, one of the great musical theater centers of the world, and try to find work in a highly competitive field.

Those ambitious Cortland students, however, got their chance to ask an expert about every detail of that journey. Jonalyn Saxer, who has performed in “Cats” and “Holiday Inn” on Broadway and will be part of the cast of “Mean Girls” later this year, shared her experience and took plenty of questions on Friday, Feb. 2.

From diet and exercise to costumes and improvisation to how much to tip hairdressers and wardrobe staff, SUNY Cortland students gained a much clearer insight to what it’s like to work in major musicals.

“I’ve never spoken to a person on Broadway before, honestly, so she gave so many affirmations about things I’ve heard,” said freshman Shannan Lydon of Lindenhurst, N.Y. “She also denied a lot of myths that aren’t really true.”

These topics come up often during acting classes. John Cavaseno, a junior from Syosset, N.Y., was glad to hear Saxer reiterate what he has already heard from his professors.

“When she got out there, she made connections and the things she learned in class were what she applied in the real world,” Cavaseno said. “Especially here in this program, they emphasize getting out there and auditioning and getting jobs now and meeting people now so that when you do graduate, you have a good basis to go from.”

“I know it’s something that I’ve stressed out about a lot, but hearing the story from a person who has done it, it really helps confirm that this is what I want to do and these are the steps to get there,” said Sara Den Bleyker, a sophomore from Rochelle Park, N.J.

Cavaseno worked at Priscilla Beach Theatre in Plymouth, Mass., last summer and he credits the skills he’s learned at SUNY Cortland for helping him land that job. He feels even more confident about his future having heard how Saxer made her way to Broadway.

Saxer, a California native, studied theatre at Syracuse University, where she befriended the daughter of Kevin Halpin, associate professor of performing arts.

Halpin made a connection and got Cavaseno backstage access when Cavaseno saw “Holiday Inn” on Broadway. He was already familiar with Saxer’s work before her appearance on campus.

The Performing Arts Department offers a variety of career preparation events for its students.

Karla Kash, associate professor of theatre at the University at Albany, visited with the cast of “Top Girls” on Feb. 2 and 3 to choreograph stage combat sequences. She also worked with all musical theatre majors to teach basic stage combat skills and safety procedures. Kash offered a similar workshop on campus in 2017.

Many musical theatre majors will audition at the New England Theatre Conference in Milford, Conn., and the Strawhat Auditions in New York City over spring break. Dozens of theaters and producing organizations use these auditions to cast their summer productions. The department will hold a mock audition on Saturday, Feb. 24, to give students an opportunity to simulate the process in front of faculty.

The department’s commitment to helping students during summer break and after Commencement is why so many aspiring actors choose SUNY Cortland.

“When I auditioned for Cortland, I knew I didn’t want to audition anywhere else,” Lydon said. “I knew I was coming here. The second I got accepted, I cut things off my list. These people made me feel so safe in my 20-minute audition that I’m happy to be here for the next four years learning from them.”