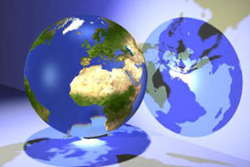 
A panel of anthropologists, international political scientists and historians will address the topic of governments around the world and their potential roles in domestic terrorism, Wednesday, March 22, at SUNY Cortland.

The four panelists, each focusing on a particular hotspot around the world, will discuss “State Sponsored Terrorism: Fact or Fiction?” at 7 p.m. in Moffett Center, room 2125.

The presentation is part of several upcoming events organized by the Clark Center for Global Engagement. The event all are free and open to the public.

The panel will discuss their area of expertise in a controlled question-and-answer format. The panel will be moderated by Brendan McQuade, SUNY Cortland assistant professor of sociology/anthropology.

Panelists and their topics include:

The event is sponsored by the Asia and Middle Eastern Studies Committee, the Clark Center for Global Engagement, the Sociology/Anthropology Department and the Campus Artist and Lecture Series (CALS).

One of the panelists, Afghan refugee and scholar Hosainy, also will lecture twice on different topics in Middle Eastern politics and culture.

Hosainy, a post-doctoral fellow at the Middle East Center at Florida State University, has a Ph.D. from the University of Texas at Austin. He has researched extensively in the fields of the Early Modern Middle East; the Ottoman Empire; gender; women; slavery; Islamic law; the Sharia Court; pious endowments and history of family.

In this talk, Hosainy will focus on the institution of domestic female slavery as recorded in the thousands of the surviving court records from the period. He will share his research on a method of integration into society of these female slaves: adoption as the children of their masters and mistresses. Although Islamic law categorically prohibited adoption, men and women of Istanbul used several methods to acquire, integrate, and adopt female slaves over the course of the 17th century.

He also will present “My Life as an Afghan Refugee” at noon on Thursday, March 23, in Old Main, Room G09.

Born in the year of the Islamic Revolution to a working-class Afghan immigrant family in Iran, Hosainy learned about the complexity of race, ethnicity, and immigration from the first years of his life.

As a first generation child of Afghan refugees, Hosainy would eventually discover that his fate was closely tied to that of his parents’ country, which he had never seen.

Hosainy’s story, which connects Kabul to Damascus from the 1970s to today, mirrors that of millions of people whose lives and identities constantly crossed nation-states and whose survival depended on a cycle of immigration and adaptation.

The talks are sponsored by the International Studies Program and the Clark Center for Global Engagement with the support of the History Department, the Political Science Department, International Awareness Club and the Campus Artist and Lecture Series (CALS).

For more information, contact Alexandru Balas, assistant professor, coordinator of the International Studies Program, and director of the Clark Center for Global Engagement, at or 607-753-2250.