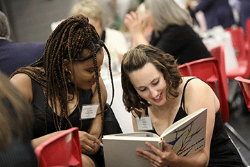 
Thomas Pasquarello, who has researched the legal case for environmental conservation and exploring how humans can live sustainably on the Earth, offered standout SUNY Cortland students guidance for their journey during the university’s Spring 2020 President’s List Reception.

Pasquarello, a professor of political science who joined SUNY Cortland in 1984, addressed 210 honorees who attended the March 9 event with their families in the Corey Union Function Room.

The President’s List is the university’s highest honor for students who excel academically. It acknowledges students enrolled in a minimum of 12 credit hours who achieve grades of A- or better in each of their courses. In Fall 2019, 9.5 % of the full-time student body reached this level of achievement.

Pasquarello, who delivered a speech titled “Back to the Future: Reflections on Democracy in the United States,” earned his Ph.D. in political science from Binghamton University.

Originally a scholar on human rights and U.S. bilateral aid, Pasquarello refocused his research in the late 1980s to New York’s Adirondack Park, writing numerous articles about the park as a model for combining public and private land to protect natural ecosystems.

In 1995, he was selected as a delegate to represent the U.S. at the World Wilderness Congress in Tromso, Norway.

A year later, while presenting a paper about the protection of natural ecosystems in Belize, Pasquarello was inspired by the small country’s commitment to pursuing environmentally sustainable economic growth. Over the next 20 years, he frequently brought Cortland students to Belize to study ecotourism as a means of sustainable development.

He also developed a close working relationship with the Belize Zoo and Tropical Education Center, partnering with them to create SUNY Cortland’s Belize Zoo Project to raise funds for conservation and environmental education in Belize.

Pasquarello helped create, and currently serves as president of, the Belize Zoo Neotropical Conservancy, a registered 501(c)(3) organization whose mission is to support education as well as charitable and scientific activities in North, Central and South America.

Next fall, a second President’s List Reception ceremony will be held to recognize Spring 2020 honorees.