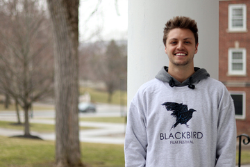 
John Swedin came to SUNY Cortland planning to major in biology with hopes of someday becoming a dentist.

He’ll graduate this spring as a writer, director and actor.

Swedin’s film “Soup” will be among the seven SUNY Cortland student films screened as part of the 83 short movies scheduled to be shown during the Blackbird Film Festival held on campus April 26 to 28.

“Soup” tells the story of a nervous college student trying to impress his girlfriend through cooking with some hilariously unexpected — and disgusting — results.

Swedin, a senior from Ringwood, N.J., is among the many students who came to Cortland with a specific career goal in mind, only to learn that there are other careers they would rather pursue. With 67 majors, Cortland gives students an opportunity to find the field of their dreams without changing schools.

Swedin changed his major to communication studies and wrote and directed “Soup” as part of an advanced filmmaking course he took during the fall semester.

After writing a script, casting actors and setting up lighting in his apartment’s kitchen, the “Soup” shoot required two six-hour blocks of filming split over two days. Swedin spent weeks editing the film and audio. He used a number of Foley techniques — a sound-editing trick that uses everyday objects to produce an intended effect on screen, such as using cocnut halves to mimic the clop of horse hoofs or crinkling cellophane to create the sound of crackling flames.

“I love sound effects,” Swedin said. “Foleying and how you make sound effects from other things, that’s so interesting. A shovel could be like a slap in the face. It’s not the same thing but it sounds exactly like it. In my film I used a lot of different things to make those noises.”

Swedin wanted to create a sense of foreboding as ingredients are added to the soup in his film. He realized that the thin, watery mixture depicted didn’t quite have enough texture for the sound he wanted to capture, so he experimented offscreen with a concoction of macaroni and cheese and mashed potatoes. He recorded the sound made by that gloppy mess and added that to the final edit.

Swedin said the experience will help him in his next step as he pursues a career in film or the music industry.

The screening of “Soup” won’t be the only time Swedin is showcased in a Blackbird student film. Swedin is an actor in Alexandra Olney’s “How Long Has It Been?” and Cloe King’s “Boy Crazy.”

He also serves as the festival’s assistant director of media production and event coverage and was an event coordinator intern at the 2018 festival. Getting an opportunity to see his film screened alongside those of directors from around the world will be a dream come true for Swedin.

“I’m really excited because I’ve seen all of these films and met the directors and they’re the real deal,” he said. “To have mine intertwined with them, I’m excited to see how it goes and see what they say and see what happens.”

The networking connections that happen between students, filmmakers and fans at Blackbird have already paid off for Swedin, who has kept in touch with directors he met a year ago.

“If this is what you want to do, this is definitely the festival you want to go to,” he said. “Last year I went and you meet so many people. At the start of this semester, one of the directors I had become close with messaged me and said, ‘I’m doing a film in Vermont and I want you on my crew or to be in it.’”

“Soup” will be screened as part of the “Dating, Diddles and Dung” block starting at 3:30 p.m. on Saturday, April 27, in Old Main Brown Auditorium. This group of films tells bizarre, disgusting stories of failed attempts at finding that special someone.

A full schedule of films is available at blackbirdfilmfest.com/blocks2019.

Admittance to film screenings, the filmmaking roundtable and the Seed & Spark workshop is free. A VIP pass that includes access to all  special events is available for $20. Purchase tickets at BlackbirdFilmFest.com/tickets.