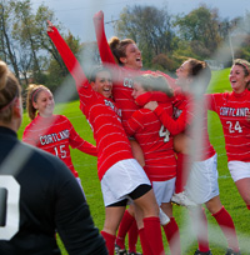 
SUNY Cortland hopes to celebrate the 40th anniversary of Title IX, the landmark legislation that ended discrimination in athletics, by making some history of its own.

On Tuesday, Nov. 27, the SUNY Cortland’s women’s basketball team will play Ithaca College in a game that the College hopes will fill the bleachers at Park Center with more fans than has ever attended a female athletic event in College history.

The 6 p.m. game is the highlight of “Thirty-Seven Words that Ignited Change,”  that will include video and photo displays as well as a memorabilia exhibit and a demonstration of how women’s basketball was played in its early days.

The game will also feature a halftime address by Azure Davey, commissioner of the State University of New York Athletic Conference, which is now headquartered at SUNY Cortland. Davey, who is in her first year as commissioner, is a former SUNY Cortland assistant athletic director.

Tickets for the game cost $4 for adults and $3 for senior citizens, non-Cortland college students and those between ages 13 and 18. SUNY Cortland students, faculty and staff members with a valid College ID and children 12 and younger receive free admission. The first 350 fans in attendance will receive a free rally towel.

During halftime of the contest against Ithaca, a SUNY Cortland physical education class will reenact a game of women’s basketball according to its early rules. That variation featured three guards and three forwards on the floor for each team. Guards and forwards were not allowed to cross half court. Only guards could play defense and only forwards were allowed to shoot.

“The goal for the entire celebration is to get people to stop and think: ‘Wow, this is how far we’ve come,’” said Ashley Whiting, SUNY Cortland’s interim assistant director of athletics. “Title IX was trailblazing with regards to both education and athletics and that much is clear when you look at the College’s history.”

Title IX of the Education Amendments took effect in 1972 and prohibited gender discrimination in educational programs and activities. More specifically, it included these 37 words: “No person in the United States shall, on the basis of sex, be excluded from participation in, be denied the benefits of, or be subjected to discrimination under any education program or activity receiving federal financial assistance.”

Those 37 words inspired four decades of excellence in women’s athletics at SUNY Cortland and they’ll provide a framework for the College’s celebration of Title IX, Whiting said.

Among the artifacts that will be on display are the blue tunics and white sneakers worn by female physical education majors in an era before the groundbreaking legislation. In 2006, the College honored pre-Title IX female athletes at its C-Club Hall of Fame Classic Team Reunion.

SUNY Cortland has produced 14 national championship teams in women’s sports and has celebrated 54 individual national championship performances. The College currently fields 13 varsity women’s teams and its C-Club Hall of Fame boasts 62 members who are women, including Gen. Ann Dunwoody ’75, the first female four-star general in the U.S. Army, and Andrea “Andi” Seger ’71, a former Division I athletic director at Ball State University and a member of the National Association of Collegiate Directors of Athletics Hall of Fame.