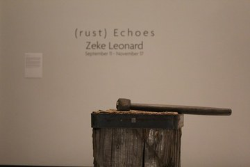 
Bryan Thomas, an art and art history lecturer and co-interim Dowd Gallery director, was working in the gallery when he noticed a group of students trying to be quiet while interacting with the “rust (Echoes)” exhibit.

The exhibit isn’t a “shush machine,” Thomas told the students.

He encouraged them to make a racket.

Since Sept. 11 and until Friday, Nov. 17, the SUNY Cortland community can make some noise with the five interactive musical sculptures on display at the Under the Balcony Gallery and Critique Space adjacent to the lobby in the Dowd Fine Arts Center.

Artist Zeke Leonard, an assistant professor of design at Syracuse University, created a soundtrack for the once-thriving railroad and the tools used to make it with his piece, “(rust) Echoes.”

“This installation engages those objects and forms in a new way, by giving steel and wood a voice and by using railroad tools and hardware as musical instruments,” Leonard wrote in the exhibit description.

The sounds of pounding nails with a hammer, roars of the train engine and bells ringing were once “music” to the railroad workers. Leonard’s display shows how music can be made from nontraditional materials. Examples include hitting fire extinguishers with poles to make bell-like sounds and hitting a nail further and further into a piece of wood, changing the pitch the nail makes each time it is struck with the hammer.

The sculptures on display include an Intonarumori, Italian for “noise intoners,” a nailing stump, gong, piano and a spikelophone, a xylophone made of railroad spikes. Each sculpture is interactive, makes different sounds and has an important connection to the railroad, which was once the backbone of the economic and social structures of Central New York more than 100 years ago.

Leo Crandall, an instructor in Syracuse University’s Department of Transmedia, composed the piece, “The Beautiful Rails,” which was performed on “(rust) Echoes” during a previous exhibition at 914Works in Syracuse in April. That performance was captured on video.

Every Thursday during October, Leonard will give free noise workshops at SUNY Cortland for students and faculty in Dowd Gallery. Artists, dancers, musicians and those who have in interest in the arts are encouraged to attend and participate. The first workshop begins at 4 p.m. on Oct. 5 and will give people an opportunity to learn about the art and play it. The second workshop, which starts at 4 p.m. on Oct. 12, will incorporate student dancers with participates from the previous workshop. A performance rehearsal is scheduled from 6 to 7 p.m. on Oct. 19.

On Oct. 26, those who participated in the workshops can show what they’ve learned. Three compositions will be performed that evening, starting at 7 p.m., using “rust (Echoes).” These compositions include student-only groups, movement theatre and a performance by Leonard himself. The time for this performance will be announced at a later date.

“(rust) Echoes” is part of Leonard’s ongoing project, Salt City Found-Object Instrument Works. The project explores resource usage in the community through the making and playing of unique musical instruments. Leonard’s creations include cigar box guitars and canjos, a banjo-like instrument made using aluminum cans. Leonard shows off his instruments on his YouTube channel.

Thomas encourages students and faculty to check out and interact with this unique exhibit.

“Oftentimes you can’t touch the art that’s on display, but this is a hands-on experience. Come play the instruments and make some noise,” Thomas said.

The lobby exhibit may be viewed whenever the building is open. Dowd Gallery is open from 10 a.m. to 4 p.m., Monday through Friday. For more information, contact Thomas at 607-753-4216.