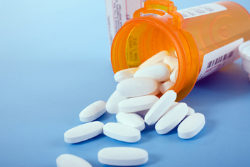 Associate Professor Joshua Peck of SUNY Cortland’s Psychology Department will be joined by other professionals interested in policies aimed at preventing opioid abuse for a campus discussion that will include an appearance via Skype of U.S. Rep. Tulsi Gabbard (D-Hawaii), who is seeking the Democratic Party’s nomination for the 2020 presidential election.

The event, “Opioid Pill Prescribing, Addiction, Prevention and Treatment: Urgently Needed Reforms,” will be held from 7 to 9 p.m. in Old Main Brown Auditorium on Wednesday, Sept. 25. It is free and open to the public. Parking is available in the Miller Building lots on Graham Ave.

“In our local and national news we're hard-pressed to go a week without the mention of the devastating impact that opioid abuse has taken on our communities,” Peck said. “Up to this point, the emphasis has been on litigating pharmaceutical companies and increasing funding for opioid treatment. However, when we look at successful outcomes concerning opioid abuse treatments, the data suggest that conventional treatment methods are largely ineffective. Thus, our panel will focus on novel preventative practices that can be combined, improved and expanded to protect patients from opioid pill abuse before it ever starts.”

Gabbard, who will join the panel via Skype from the campaign trail, has made addressing the opioid crisis a major part of her campaign platform. She co-introduced the Opioid Crisis Accountability Act of 2019 in May with Rep. Ro Khanna (D-Calif.). The act would prohibit the illegal marketing and distribution of opioids and create criminal liability for top company executives.

“As we look at treatment options and support for those dealing with this addiction, it's important that we actually focus on the root cause of the problem," Gabbard said on the House floor in support of the legislation. "We have seen for decades how major pharmaceutical companies have misled the FDA, doctors, and patients about the safety and risks of opioid dependency on commonly prescribed prescription drugs in their efforts to sell more drugs."

Also joining the panel are:

Noren has tried to avoid prescribing opioids to his patients and has found success in using other methods to manage chronic pain. He read Peck’s academic research on addiction and reached out to create this discussion.

The idea for this event is to talk about the opioid crisis from various perspectives. Noren and Benivegna will provide insight from a medical angle, as doctors who interact directly with patients. Peck will offer a glimpse at the research side of the crisis and how his work in behavioral and neural mechanisms and treatment strategies for substance abuse support this alternative approach on opioid prevention, rather than just focusing on treatment.

Noren in particular will make a case for exploring options to prevent opioid pill prescription as a means to cutting abuse. Although an estimated four to six percent of people who misuse prescription opioids transition to heroin, opioid overdoses increased 30 percent from July 2016 to September 2017. Certain areas of the country have been particularly hard hit by the crisis. Overdoses increased by 70 percent in the Midwest in that time period.

This national trend has been felt in our own backyard, as opioid abuse has risen dramatically throughout Central New York. Onondaga County, just north of Cortland, had more opioid deaths in 2017 than any other county in New York, after seeing it’s numbers triple since 2014, according to the Onondaga County Health Department.

Maher, who has more than three decades of political and public affairs experience, will touch on policy reform and oversight topics.

Congresswoman Gabbard will deliver her thoughts on how to tackle the crisis from a federal level.

Ultimately, the panelists hope to create pathways to partnerships between the pharmaceutical industry, prescribers and researchers and create a new model for prescribing through both state and federal laws.

A live stream of the event will be available on Cortland.edu.