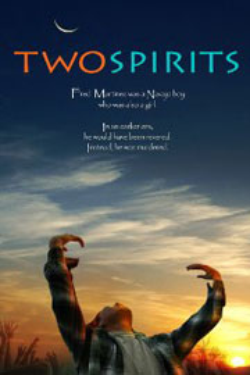 
A film that mourns the death of a young hate crime victim will launch SUNY Cortland’s Native American Film Series on Tuesday, Oct. 25.

Presented by the College’s Native American Studies Program, the series is free and open to the public. The four films will be presented at 7 p.m. on Tuesdays in Sperry Center, Room 205.

“Two Spirits” is the story of Fred Martinez, a young teen who possesses a balance of masculine and feminine traits, which is considered a special gift according to his traditional Navajo culture. His determination to express his truest identity costs him his life at age 16, when he was murdered in Cortez, Colo. The film interweaves the tragic story of a mother’s loss of her son with a revealing look at a time when the world simply wasn’t divided into male and female and many Native American cultures held places of honor for people of integrated genders. The film is co-sponsored with the Lesbian, Gay, Bisexual, Transgender and Queer Committee.

“Older Than America,” a contemporary suspense drama, will be shown Nov. 1. The film deals with the issues created by the boarding schools that the government imposed on Native children in the United States and Canada and how generations were damaged within the affected families. Directed by Georgina Lightning, the film stars Lightning, Adam Beach, Wes Studi and Tantoo Cardinal.

“Older Than America” follows Rain, played by the film’s director Georgina Lightning, a Native American woman living in northern Minnesota with her fiancé, Johnny, played by Adam Beach, the local tribal police officer. Rain is struggling with disturbing visions she has been having recently, and as a result she begins to worry that she might be suffering from schizophrenia like her mother did. When a geologist, played by Bradley Cooper, from Minneapolis comes to investigate some strange seismic readings at an old abandoned boarding school for Native Americans, events are set in motion that will lead Rain to discover a horrible secret.

“Two Indians Talking” will be shown on Nov. 8. This film conveys the humorous, uncensored conversation between two First Nation men who are about to take part in their community’s roadblock. Each man wants fiercely to do the right thing, but each struggles with the question, “When you do something for the right reasons, does that make it the right thing to do?” Adam Beach also is in this movie, playing Justin Rain, a university-educated Native of the Seventh Generation, raised to believe that knowledge is the Native American’s best tool for survival. Nathan, played by Nathaniel Arcand, is a high school dropout whose dreams have been consistently crushed in his endurance of the past 20 years. On the eve of their nation’s roadblock, the cousins prepare for the impending battle in a community center that they paint with heartfelt conversation and humorous debate about life, culture, identity, women, literature, dreams, politics, education, poverty and the possibility of hope for the future.

“Apache 8” will conclude the series on Nov. 15. The film tells the story of an all-women wild land firefighter crew from the White Mountain Apache Tribe that has been fighting fires in Arizona and throughout the U.S. for more than 30 years. The film delves into the challenging lives of these Native firefighters. Four extraordinary women from different generations of the Apache 8 crew share their personal narratives with humor and tenderness. They speak of hardship and loss, family and community, and pride in being a firefighter from Fort Apache. “Apache 8” weaves together a compelling tale of these remarkable firefighters, revealed for the first time.

The series is sponsored by Native American Studies, Auxiliary Services Corporation, the Center for Gender and Intercultural Studies and the Lesbian, Gay, Bisexual, Transgender and Queer Committee.