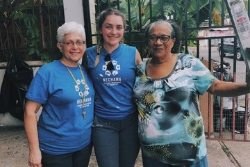 
SUNY Cortland sophomore Isabella Danisi had been to Puerto Rico before to visit family members and relax.

She didn’t have a chance to do either of those things during her most recent visit this June.

Danisi, a communication studies major from Bedford Hills, N.Y., was one of six SUNY Cortland students who volunteered parts of their summer to help with the NY Stands with Puerto Rico Recovery and Rebuilding Initiative.

The people of Puerto Rico are still dealing with the aftermath of Hurricane Maria, which caused more than $90 billion in damage when it crossed the island in September 2017. Nearly a year later, blackouts and brownouts are still common, vast stretches of the Island remain in disrepair and Puerto Rico’s finances are in tatters.

“Just having a Puerto Rican background made it obviously 1,000 times more meaningful,” Danisi said. “My whole family was so proud and my family in Puerto Rico knew I was there. They loved that I came there and was able to do something.”

Working with Taryn Grimes ’18 and a group of students largely from SUNY Oswego, Danisi spent nine hours each day on rooftops in Guaynabo, a municipality located just west of San Juan. They repaired holes and cracks that had allowed rain to seep into people’s homes since the hurricane.

“My group was able to go back to the first house we completed on the last day,” Danisi said. “It had been pouring that day and she told us that no water had come into her house for the first time. That’s when we knew what we were doing was working and it was so worth it. She was ready to cook us food when we got there.”

Senior biology major Janiellee Alvarez, from Norwich, Conn., will travel to Puerto Rico later this month. She was born in San Juan and later moved to New England with her family.

Alvarez was in Cortland last year when Hurricane Maria hit and was following family members on social media for updates.

“I remember being in class and my uncle posting a live video on Facebook of all of the rain and wind,” Alvarez said. “The hard part about the storm was when we lost contact. We had to wait almost a week to hear back from some of our family members.”

Alvarez plans to become a doctor after her time at SUNY Cortland, with an emphasis on bettering the quality of life for her patients. She hopes that she’ll gain related experience working with those in need in the areas around San Juan.

“Having the opportunity to go to Puerto Rico to help with the relief effort for me feels like a privilege and an honor,” she said. “After the hurricanes, we sent as many supplies as we could. Actually going there and being able to pick up the fallen pieces will feel so much more rewarding.

“I hope that during the trip, students who are not very familiar with Puerto Rico will come to see that it is much more than a vacation place. It’s a country rich with deep-rooted culture, amazing food and even more amazing native people.” Puerto Rico is an unincorporated territory of the United States, and its residents are U.S. citizens.

Senior Alexandra Cicero, a dual international studies and communication and media studies major from Leicester, N.Y., went to Puerto Rico with students from SUNY New Paltz from July 15 to 28. Cicero had prior experience abroad, having studied in Cluj-Napoca, Romania as a Newman Civic Fellow during her sophomore year.

The opportunity to travel to another part of the world was part of the appeal for Cicero. She also is committed to providing aid to those in need, as she served as student coordinator for the SUNY Cortland Cupboard, a food bank for food-insecure students that was founded in 2017.

“I really wanted to continue to get out and see more places and meet people and experience different things and cultures,” she said. “I took six years of Spanish in school and I’ve used it very little so this was a chance to practice my Spanish. I knew that people needed help. People were experiencing power outages and flooding and they didn’t have proper housing to live in and nothing was being done about it.”

Cicero, who traveled with senior Stephanie Gentile, a communication and media studies major from South Hempstead, N.Y., worked primarily in the Vietnam neighborhood of Guaynabo, repairing damaged homes. Like Danisi, she felt the incredible gratitude from the people she helped. A pair of neighbors prepared daily feasts of rice, vegetables, duck and chicken to fuel their efforts.

“I tried to talk to them to the best of my ability, even if it was pretty rusty,” Cicero said. “But even if it was just little conversations, introducing yourself or talking about the area, they were so kind to you.”

While her experiences were limited mostly to assisting individual homeowners, Cicero did gain a deeper understanding of how non-profit and non-governmental organizations interact with government in disaster relief situations, a career path that may be in her future.

“It confirms and steers me in the right direction,” she said. “I just like helping people and seeing places. Even if you can’t be reaching out to people halfway across the world, helping people wherever you can is important.”

UNICEF USA contributed $500,000 to Gov. Andrew Cuomo’s Puerto Rico Recovery and Rebuilding Initiative. The approximately 500 SUNY and CUNY students who traveled to Puerto Rico this summer also worked with NECHAMA — Jewish Response to Disaster, a Minnesota-based volunteer organization that is focused on low-attention events and at-risk communities. “Nechama” means “to comfort” in Hebrew.

Students stayed in dormitories at Universidad del Sagrado Corazón in San Juan and had opportunities to visit cultural sites in the area in their downtime. Danisi made quick friends with members of her group from SUNY Oswego and said they are making plans to get together at some point during the fall semester. She said she is also investigating how to create a UNICEF club at SUNY Cortland during the 2018-19 school year.

Kaitlyn Almonte-Hernandez, a sophomore political science major, went with a group from SUNY Geneseo from July 1 to 14.

For Alvarez, supporting the recovery and rebuilding initiative is personal. That’s why she can’t wait to get back to Puerto Rico.

“The most fulfilling part of this is that these people are not complete strangers,” she said. “They are my aunts, uncles, brothers and neighbors. I get to give back to the country that has given so much to me.”