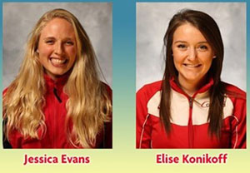 The award is given to one student-athlete in the conference, from each sport, who has the highest cumulative grade point average, over a minimum of three semesters, among all first-team or second-team all-conference selections. The Chancellor's Scholar-Athlete Award recognizes a combination of academic excellence and outstanding athletic achievement within the SUNY system at the Division l, Division lll and junior college levels. A student-athlete is only permitted to win the award once.

Evans is a physical education major with a 3.89 cumulative GPA entering the spring semester. This past winter she earned second-team All-SUNYAC honors with a runner-up finish in the 100-yard butterfly at the SUNYAC Women's Swimming and Diving Championships. She also swam on a 200-yard freestyle relay team that won the SUNYAC title and earned honorable mention All-America honors with a 12th-place finish at the NCAA Division III Championships.

Konikoff is a business economics major with a 3.85 overall GPA entering the spring semester. She was the Eastern College Athletic Conference (ECAC) Division III balance beam tri-champion this past season. As a sophomore, she won the ECAC vault title and placed second on balance beam. While women's gymnastics is not sponsored by the SUNYAC, it is still awarded a SUNYAC Chancellor's Award based on All-ECAC performers from SUNYAC schools that sponsor the sport.