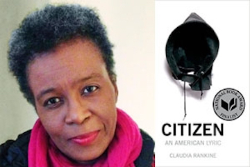 
Claudia Rankine, the award-winning poet whose book-length poem “Citizen, An American Lyric,” helped inspire the 2016-17 theme for SUNY Cortland’s Cultural and Intellectual Climate Committee series of events, will speak on campus during the last week of classes.

Rankine, whose work blurs the distinction between poetry and prose as well as reality and art, will do a reading and sign copies of “Citizen” at 7 p.m. on Thursday, May 4, at Brown Auditorium, Old Main. It holds the distinction of being the only poetry book to be a New York Times bestseller in the nonfiction category.

“The exciting thing about Rankine is that she speaks directly to issues of race and gender in ways that connect to our campus conversations and to the wider Black Lives Matter movement,” said Scott Moranda, an associate professor of history and co-chair of the Cultural and Intellectual Climate Committee.

The committee is a group of SUNY Cortland faculty and staff appointed by the provost to choose a theme to frame a year-long series of lectures, discussions, film screenings and art exhibits. This theme is meant to promote cultural life on campus and spark campus discussions about issues relevant to today's world.

This year’s theme is “Art and Everything,” which explores the idea that art does more than simply reflect life. Works like “Citizen,” which was chosen as the common read for this year, can influence ideas, spark action and shape society. Pablo Picasso’s painting “Guernica,” a disturbing portrait of the horrors of the Spanish Civil War, and Spike Lee’s film “Chi-Raq,” which uses the plot of an ancient Greek play to explore inner-city violence, were the other two common pieces of art selected for the theme.

But “Citizen” is just Rankine’s most recent artistic success. She was the winner of a 2016 MacArthur Foundation “Genius Grant” and has authored five critically acclaimed volumes of poetry, two plays and various essays. She is currently the Frederick Iseman Professor of Poetry at Yale University and a chancellor of the Academy of American Poets.