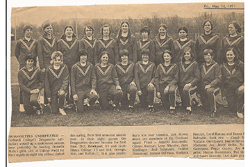 
In 1971, when SUNY Cortland’s softball squad was undefeated for the first time in its fledgling, three-year history, 13 of 20 winning team members were sisters in the Theta Phi sorority.

In fact, much of the team’s early history was written with the stellar playing successes of Theta Phi sisters, according to two from that early era, Barbara “Barb” Moenich LoPiccolo ’69 and Barbara Hemink ’72.

“Playing for Sally Wallace from 1970 to 1972 was wonderful,” Hemink said, referring to coach Sally Yeager Wallace ’53, M ’63. “Sports provided an opportunity to develop close friendships while striving for a common goal.”

Those friendships formed through softball and sisterhood remain strong today. Although the sorority disbanded for lack of membership around 1984, the sisterhood reunites annually in Raquette Lake and applauds the team’s achievements through the present.

And at this year’s reunion, Hemink and LoPiccolo will share an opportunity for their sisters to help improve SUNY Cortland’s softball facilities while permanently honoring notable Theta Phi softball players.

They think their pitch has a pretty good hook. Actually, it has five of them.

By the time the College celebrates the softball program’s 50th anniversary at Alumni Reunion next year, Theta Phi hopes to raise $5,000 to name five metal softball hooks for women’s softball equipment in the dugout, recognizing sisters who played a significant role in the team’s history.

Already, 25 Theta Phi sisters raised $3,270 “on the fly”, in a fundraising campaign spearheaded by Hemink and LoPiccolo. That’s more than enough for naming rights for three hooks, which are available for $1,000 each.

Two of those hooks will be named with plaques memorializing former classmates, the late Bette Schneider ’77, M ’84 and Barb Lee Alm ’78, LoPiccolo said. Schneider was a crack catcher and Alm served as team manager. Their names will appear on two of the commemorative plaques mounted near the hooks. The sisters will choose another, still-living sister to honor this way as well.

Other members of Theta Phi will soon have an opportunity to learn more about the softball field campaign’s progress and consider a gift toward naming the two remaining hooks. Nearly 40 sorority members will gather Oct. 5-8 at the William H. Parks Family Center for Environmental and Outdoor Education at Huntington Camp for their annual mini-reunion.

“If the group is capable of raising a total of $5,000, with just another $1,730, we can put the Theta Phi name on the recognition plaque/wall that will go up at the end of the campaign,” LoPiccolo said.

The College’s Alumni Reunion 2019, is set for July 11 to 14 and among other milestones will celebrate softball as the featured sport group and its 50th anniversary as a major milestone of the College’s Sesquicentennial Celebration.

With that in mind, the Cortland College Foundation is seeking gifts to bring the softball playing field into the 21st century. By Alumni Reunion 2019, these hooks will be mounted in the home dugouts beside a greatly improved varsity softball field at south campus, reflecting the results of all the team’s fans who have supported the enhancements.

Naming a sturdy softball dugout hook is a concept comparable to the seat naming opportunity offered several years ago to help support the renovated Dowd Fine Arts Center Theatre. The gifts will go into a fund for much-needed upgrades to the softball facilities.

“Dugout hooks” did not figure into the lexicon of the sport 50 years ago, said LoPiccolo, who was on the original team roster, and like many Theta Phi members, a physical education major.

“In my day, we wouldn’t have needed a hook because all we brought to the game for practice would have been a glove and cleats, maybe a hat or visor. That’s all we needed,” said LoPiccolo, a retired Norwich (N.Y.) School District physical education teacher and coach. “Today the women bring a big bag to practice. It probably has a couple of bats — who would have had their own bat when I was playing? They just need room for things like extra cleats, a change of shirts, batting gloves, water bottles and nutrition bars.”

Hemink cited the excellent quality of her Cortland education as a motive for her involvement in the initiative. After graduation, she taught physical education and coached for many years at Clarkstown Senior High School in Rockland County.

“The professors in the Physical Education Department were not only dynamic in their knowledge and professionalism, they were supportive of the endeavors of their colleagues and us,” Hemink said. “They came to our games and some served on our sorority board. Additionally, they made Camp Huntington a phenomenal experience and, in general, made Cortland our ‘home away from home.’”