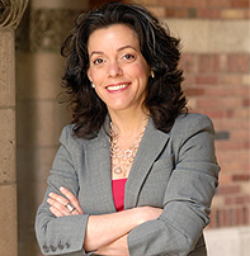 
Joanne B. Freeman, who was rated one of the nation's "Top Young Historians" in 2005, will discuss the physical violence in the U.S. Congress between 1830 and the Civil War on Monday, April 30, at SUNY Cortland.

Freeman, a professor of history at Yale University, will share what her current research project has revealed in a talk titled “The Field of Blood: Congressional Violence in Antebellum America” at 4:30 p.m. in Brockway Hall Jacobus Lounge.

The lecture, which is free and open to the public, concludes “In/Civility,” the College’s yearlong series of conferences, lectures, film screenings and other events. “In/Civility” is presented by the Cultural and Intellectual Climate Committee (CICC).

Freeman, who joined Yale’s History Department in 1997, specializes in the politics and political culture of the revolutionary and early national periods of American History.

In the last two years, she has worked as a historical consultant for the National Park Service in the reconstruction of the Alexander Hamilton Grange National Memorial.

Her current scholarship explores what the physical violence in the U.S. Congress suggests about the institution of Congress, the nature of American sectionalism, the challenges of a young nation's developing democracy, and the longstanding roots of the Civil War.

She is the author of the 2001 text Affairs of Honor: National Politics in the Early Republic (Yale University Press), which explores the “culture of honor” that animated the political relationships among the founding fathers, most notably, the famous Hamilton-Burr duel. The text won the 2002 Best Book Award of the Society for Historians of the Early American Republic. Her book was a featured selection of the History Book Club, and she has appeared on C-SPAN and on the PBS series, “The American Experience.”

Another of her books, Alexander Hamilton: Writings, was published by Library of America in 2001. She has written for Yale Law Journal, William and Mary Quarterly and the Journal of the Early Republic as well as contributed numerous articles for edited volumes.

Freeman has presented in venues such as the Smithsonian Museum of American History, the Library of Congress and Colonial Williamsburg. She has researched for three exhibitions at the Library of Congress and one at the Museum of American Financial History. Freeman has served as historical consultant to “American Masters” on PBS, the History Channel, the Discovery Channel, the American History Media Center, the U.S. Department of the Treasury and the National Park Service’s Hamilton Grange National Memorial.

A fellow of the Society of American Historians, she has a bachelor’s degree from Pomona College and master’s and doctoral degrees from the University of Virginia.

For more information, contact organizer and Associate Professor of History Scott Moranda at (607) 753-2052.