Undergraduates to March on May 12 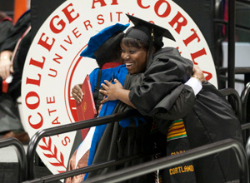 
SUNY Cortland will conduct two undergraduate Commencement ceremonies — one at 9:30 a.m. and the other at 2:30 p.m. — on Saturday, May 12, in the Park Center Alumni Arena.

An estimated 1,408 seniors will receive bachelor’s degrees during Commencement exercises, which will be presided over by SUNY Cortland President Erik J. Bitterbaum.

Geoffrey C. Godbey ’64, whose research revolutionized the way leisure time is perceived and continues to influence both public policy and private development, will address the graduates during the morning and afternoon ceremonies. The State University of New York will bestow an honorary Doctor of Humane Letters upon Godbey during Commencement. A prelude, processional and recessional music will be provided by the Cortland Brass Ensemble.

President Bitterbaum will deliver the charge to graduates.

During the morning ceremony, Gradin Avery, associate provost for enrollment management and marketing, will carry the mace, a ceremonial staff used as a symbol of institutional authority at the College’s Commencement and academic convocations. Four multi-colored gonfalons, representing the College, its School of Arts and Sciences, School of Education and School of Professional Studies, will be carried, respectively, by Gail Wood, director of Memorial Library; Larry Klotz, distinguished teaching professor of biological sciences; Joy Mosher, associate professor of childhood/early childhood education; and Jeffrey Walkuski, associate professor of physical education.

Kelsey Reed of Breezy Point, N.Y., and Samantha Rey of Syracuse, N.Y., both senior musical theatre majors, will sing the national anthem and the Alma Mater, respectively, for the morning ceremony.

During the afternoon commencement, Raymond D. Franco’ 72, M ’75, vice president for institutional advancement, will carry the mace. Gonfaloniers will be: Thomas Hischak, professor of performing arts, with the All-School banner; Mary Kennedy, distinguished teaching professor of English, representing the School of Arts and Sciences; Janet Duncan, associate professor of foundations and social advocacy, representing the School of Education; and Robert Johnson ’58, coordinator of athletic tutoring in the Athletics Department, for the School of Professional Studies.

Keith Golden and Angelia Golden, both of Schenectady, N.Y., and both senior musical theatre majors, will sing the national anthem and the Alma Mater, respectively, for the afternoon ceremony.

Nancy Niskin Sorbella ’82, the SUNY Cortland Alumni Association president, officially will welcome the graduates into the ranks of the College’s alumni residing in all 50 U.S. states and more than 40 countries. In its 144-year history, SUNY Cortland has graduated more than 68,000 alumni.

The Undergraduate Commencement Committee is co-chaired by Virginia B. Levine, executive assistant to the president, and Marley Sweet Barduhn ’76, associate dean of the School of Education.

This year, both undergraduate Commencement ceremonies will be broadcast live on Time Warner Cable access Channel 17 to viewers in the Cortland area. The ceremonies also can be viewed on campus in any classroom equipped with a television, on channels 2 and 17.

Under a tradition inaugurated at the 2004 ceremony by President Bitterbaum, undergraduates may honor a special person who has helped them achieve their academic pursuit or goals. The respective name of the honoree will be read along with each graduate.

Graduating seniors wishing to acknowledge their multicultural heritage also will participate in a Kente Graduation Ceremony at 8 p.m. on Friday, May 11, in the Corey Union Function Room. The traditional, woven multicolored kente cloth of Ghana, originally worn by royalty, has become an important symbol for many African- Americans to highlight their connection to the African continent.