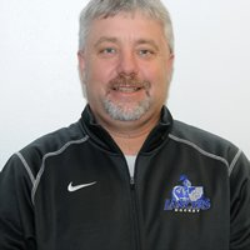 “I am extremely pleased and excited to welcome Rick as our new women’s ice hockey head coach,” Urtz said. “With his experience and knowledge of the game, I anticipate a great future for the program. No doubt, he is an excellent addition to the Red Dragon staff.”

Prior to the Gilmour Academy, Filighera was hired as the inaugural women’s ice hockey head coach at Division I University of Maine in 1997 where he led the squad through the 2003-04 season. He was nominated for the Eastern Collegiate Athletic Conference (ECAC) Coach of the Year during his first season behind the bench and finished as the runner-up for Hockey East Coach of the Year in his final campaign.

Previously, Filighera held his first collegiate head coaching position with the Rochester Institute of Technology women’s ice hockey team from 1995-97. He helped guide the program to a pair of ECAC playoff semifinal appearances, including a runner-up finish in 1996. He began his career as an assistant coach at Brockport High School in Brockport, N.Y., and eventually assumed the head coaching position from 1993-95.

“I feel very fortunate and honored in becoming the new head women’s coach at SUNY Cortland. I would like to thank Mr. Urtz and the athletic department staff for giving me this opportunity,” Filighera commented. “I look forward to the challenge of building this program and believe my experiences over the past 20 years in the women’s game will help me lead the SUNYAC Cortland program into the future.”

Throughout his career, Filighera has attended multiple clinics and mentored at several regional and national ice hockey camps. He also served as the head coach of the Gilmour Gladiators, a girls’ U14 Tier 2 team, from 2014-16, guiding the team to a Mid AM District title and quarterfinal appearance at the USA Tier 2 Nationals in Lansing, Mich., in 2015.

A native of Buffalo, N.Y., Filighera received a bachelor’s degree in physical education from Brockport in 1991 and earned his master’s degree in educational leadership at Maine in 2004. He and his wife, Palma, have two children, Kyra and Griffon.