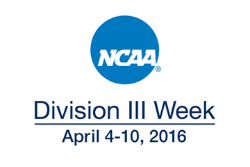 
The NCAA’s Division III distinguishes itself by emphasizing a well-rounded student-athlete experience, one that blends academic excellence, leadership and athletic accomplishments.

“Division III Week is a chance for us to reflect on the far-reaching accomplishments of our student-athletes — not just the awards and accolades they win on the field, but also the sacrifices they make and their efforts off it,” said SUNY Cortland Director of Athletics Mike Urtz ’94 M ’99. “SUNY Cortland produces champions in competition, in the classroom and in the community, and this week marks a great opportunity to recognize that.”

Division III Week will be recognized formally during halftime of the SUNY Cortland men’s lacrosse game on Wednesday, April 6. The date coincides with National Student-Athlete Day and the College’s approximately 175 student-athletes who have earned a cumulative grade point average of 3.3 or higher will receive certificates for their efforts. The Red Dragons host Union College at 4 p.m.

Student-athletes with unique stories and who embody the Division III experience will be spotlighted each day throughout the week with short videos. Red Dragons past and present are invited to use #D3Week or #whyD3 and join the conversation by sharing their own successes.

It’s hard enough to play one sport at the collegiate level — let alone two — but that’s exactly what Erin Wolstenholme has done at SUNY Cortland while perfecting the art of time management as a two-sport student-athlete in women’s basketball and softball.

The Oneonta, N.Y., native excelled at both sports in high school in addition to soccer. Everything aligned late in her college search process when Erin decided to attend SUNY Cortland, where she wasn’t forced to focus on one. Early on, however, the demands of playing sports in back-to-back seasons took a small physical toll and Erin battled through injury.

She persevered with a positive attitude and unwavering effort, and she’s currently in her final sports season as a Red Dragon — serving as a co-captain and starting shortstop for the College’s nationally ranked softball squad.

As a child growing up in Haiti, Carrel Joseph was surrounded by friends who played soccer, easily the country’s most popular sport. Carrel excelled as a goalie, though he always gravitated more towards basketball. Sports made the adjustment easier after a catastrophic earthquake forced his move to the U.S. — away from his parents — in 2010. Carrel continues to chase his dreams at SUNY Cortland, where he’s a member of the men’s basketball team.

His time as a Red Dragon has included several highlights on the hardwood. This past season, he helped lead his team to a SUNYAC Championship and the NCAA Tournament’s second round. Carrel also was named most valuable player of the SUNYAC Men’s Basketball Tournament after posting a career-high 24 points in the conference title game.

Ask him for the season’s best moment and he’ll point to a December win over SUNY Poly. Although his personal stat line was modest, Carrel’s excitement was understandable: his mother made the trip from Haiti to see him play in person for the first time in his college career.

Colleen Wright anchors the defense of the nation’s top Division III women’s lacrosse team. And she does it while playing with Type I diabetes, a condition she has managed since childhood that forces the team’s senior captain to wear an insulin pump at all times.

Colleen’s body cannot regulate blood sugar on its own, which means high blood sugar levels can force vomiting while low levels can cause seizures. The condition is especially difficult to manage during competition.

That didn’t stop Colleen from starting every game during last season’s national championship run. This past winter, she also served as a youth ambassador for the Juvenile Diabetes Research Foundation, consulting with high school students who plan on attending college with the same condition.

A community health major from Huntington Station, N.Y., Colleen wants to become a health educator or a nutritionist after graduation, working to meet the needs of people with diabetes and helping them excel just as she’s done.

Luke Zuber didn’t accumulate any statistics during his one and only season as a goalkeeper for the College’s men’s soccer team. His importance was evident in other ways, more specifically the challenges he overcame before earning a roster spot as a walk-on in his final season.

It took time to settle on the perfect academic major, though the Maine, N.Y., native eventually found it in fitness development. Last year, he was cut from the College’s club team. But neither of those setbacks compare to the medical hardships Luke conquered just to attend SUNY Cortland. He beat brain cancer and several bouts with seizures throughout his childhood, even earning Eagle Scout distinction as a teenager.

His medical past forces him to play soccer with limited feeling and mobility in his right foot — something that Luke continues to make up for with his heart.

You’d be hard-pressed to find someone who embodies the term ‘student-athlete’ more than Maddy Scozzie.

Very few of her peers can say that they’ve won a national championship. Even fewer can say they’ve done it while achieving perfect marks in the classroom. Maddy, a senior on the College’s women’s gymnastics team, remarkably has done both — earning a national title on the uneven bars in 2015 and maintaining a 4.04 grade point average over her four years.

A native of Ashburn, Va., and a childhood education major, Maddy aspires to be a schoolteacher. She most recently garnered National Collegiate Gymnastics Association All-America accolades for the fourth time in her career and last summer was named a Capital One Division III First Team Academic All-American, an honor she rates as one of her proudest accomplishments at SUNY Cortland.