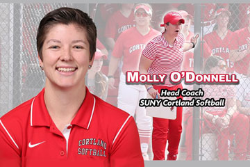 
Molly O'Donnell has been chosen as SUNY Cortland's new softball head coach in an announcement from director of athletics Mike Urtz. O'Donnell replaces Julie Lenhart, who retired following the 2019 season after leading the Red Dragons for 25 seasons. O'Donnell served as Lenhart's associate head coach during the 2018-19 school year and was an assistant coach in the program during the 2015 and 2016 seasons.

"I am incredibly honored and extremely excited to lead Cortland's distinguished softball program," said O'Donnell. "I have been very fortunate to be a part of the Cortland Athletic department both as an assistant and associate head coach – it is a special place, and I cannot wait to get started! I would like to thank Mike Urtz and the entire search committee for entrusting me with this opportunity.

"Softball at Cortland has been a pillar of success in athletics, and both Mike and the search committee members exhibited the utmost respect and appreciation for the program through the entire interview process. I am grateful beyond measure to my family, mentors and all those close to my heart for their unwavering belief and investment in me as a professional and coach. I would especially like to thank Coach Julie Lenhart, who has created and sustained a championship caliber program here at Cortland. Her mentorship and guidance as a member of her staff was irreplaceable. I gladly accept the chance to continue and build upon such a history of success both in the SUNYAC and at the national level."

O'Donnell helped Cortland finished 31-16, win both the SUNYAC regular-season and postseason titles, and finish second in an NCAA regional to tie for 17th place nationally in 2019. In her previous two years as an assistant, Cortland had a combined 74-24 record, won two SUNYAC crowns and earned four NCAA tournament wins.

The Niskayuna, N.Y., native served as an assistant coach at Division I Columbia University in 2017 and 2018. Working with the Lions' hitters, she helped the team set school single-season records for runs scored, home runs, RBI and total bases in 2017 and establish new school records in batting average, slugging percentage, runs, homers, triples, RBI, walks and total bases in 2018.

Prior to her first stint at Cortland, O'Donnell spent the 2014 season at Skidmore College, where she helped guide the Thoroughbreds to their first postseason appearance in four years. O'Donnell and the rest of the Skidmore staff were named 2014 Liberty League Coaching Staff of the Year.

"We are very excited about Molly taking over the Cortland softball reins," said Urtz. "She has already played a major role in the team's past successes, and I'm confident that with her knowledge of the team and the sport, combined with her incredibly strong work ethic, we will continue to be one of the nation's premier programs. I'd also like to recognize and thank Julie Lenhart for her 25 years of coaching excellence at Cortland. She lifted us to new heights and made a difference in the lives of countless players who have gone on to become incredibly successful and supportive alumna."

A two-year captain and four-year letterwinner at Ithaca College, O'Donnell was named a First Team Empire 8 All-Star as a freshman in 2010 and earned second-team accolades after hitting .348 with 29 RBI her junior season. O'Donnell's performance in the 2010 postseason landed her on the NCAA Regional All-Tournament Team.

O'Donnell graduated from Niskayuna High School in 2009. She played five seasons of softball for the Silver Warriors, earning All-Suburban Council honors as a junior and senior, and also lettered in basketball and field hockey.