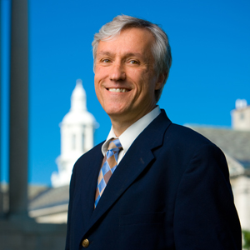 
Gary A. Giovino, a nationally respected researcher on tobacco use in the U.S., will discuss the connection between tobacco use and fruit and vegetable intake during the sixth annual Charles N. Poskanzer Lecture on Tuesday, March 26, at SUNY Cortland.

Giovino, a professor and chair of the Department of Community Health and Health Behavior at the University of Buffalo, will present “Tobacco and Food: Connecting the Dots,” at 7 p.m. in Corey Union Exhibition Lounge.

Giovino’s study, “A Longitudinal Evaluation of Fruit and Vegetable Consumption and Cigarette Smoking,” published in May 2012, considers the relationship between healthy food intake and smoking. Although it does not go as far as to say fruits and vegetables alone can stop people from smoking, the report suggests that a healthy diet can help eliminate addiction, especially as it relates to mood and behavior.

The fund was established through the Cortland College Foundation in 2006 as an endowment to support an annual, public lecture offered by the College’s Health Department in honor of its former colleague. Since Poskanzer’s death in 2010, the fund has continued to grow through donations made in his memory as part of “Educating Champions, the Campaign for Cortland,” SUNY Cortland’s ambitious effort to raise $25 million by June.

“The Health Department uses the Poskanzer Lecture to highlight current public health issues,” said Bonni Hodges, the department’s chair, noting that the College’s implementation of a tobacco-free policy spurred organizers to identify an international leader in tobacco use research to deliver the lecture.

Hodges said that Jill Murphy, an associate professor of health, considers Giovino a mentor and brought him to the department’s attention.

“Historically, the Poskanzer lecturer’s visits to classes combined with the formal talk itself stimulate discussions within and outside of the classroom among faculty, staff and students. Our colleagues working in public health agencies throughout Central New York look forward to the lecture and have been inspired by what they have learned over the years.”

Giovino’s work has focused on monitoring tobacco use and dependence among youth and adults in the U.S. He recently has worked on developing the Global Tobacco Surveillance System (GTSS), a tool utilized by the Centers for Disease Control and Prevention that collects data through four surveys. With that information, the GTSS aims to design, implement and evaluate tobacco intervention programs.

In addition to his research, Giovino has developed community-based projects related to using lifestyle factors such as exercise and nutrition to facilitate smoking cessation. He has received multiple national awards for his work and serves as a member of several professional organizations tied to tobacco control and drug use. He also reviews articles for many health-related journals.

For more information on the Poskanzer Lecture, contact Alan Sofalvi, associate professor of health, at 607-753-2980.