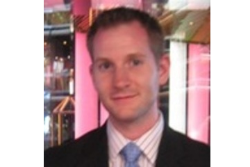 
Rob Tillotson ’06 doesn’t show up on Washington Capital’s stat sheet. He hasn’t scored any goals or made any saves, yet his efforts are a huge part of the professional hockey team’s success this season.

As the Washington Capitals’ director of team services since 2014, he handles the team’s travel logistics, helping the operation move from Point A to Point B and letting the coaches and players focus on hockey.

It’s no simple task to move 23 players and their equipment, along with a small army of coaches, trainers and staff across the United States and Canada for 41 road games, not including playoffs, which began this week.

“I do all the hotel arrangements, plane arrangements, buses, meals, player tickets, catering at home and on the road and at the rink for family rooms,” Tillotson said. “I’m kind of a liaison for the wives and anything they might need from the organization. It’s a pretty wide-cast net.”

It’s the kind of high stakes juggling he said he learned how to do while a sport management student at SUNY Cortland.

As a student, Tillotson had an opportunity to be a game-day intern for the Binghamton Senators of the American Hockey League. One night, he would work in the press box assisting with statistics. The next, he might be hanging from the rafters of the Floyd L. Maines Veterans Memorial Arena, unfurling a Binghamton Hockey Hall of Fame banner for a pregame ceremony.

“The thing that was awesome about Cortland was that they let me use a lot of that real-world internship experience as credits toward certain classes,” Tillotson said. “They were very encouraging for me to go out and do that stuff and they found ways to build that into my schooling. The thing I’m most thankful for is that they were so open to letting me go do this.”

A summer internship with the New York Rangers during his time at SUNY Cortland opened doors. That work helped him get a full-time job in Atlanta in which he worked primarily in media relations but helped with travel logistics on road trips.

“I got a little idea of that side of the industry when I was there,” Tillotson said. “At that point, I felt like that’s what I would rather do full time.”

Looking back on his time at SUNY Cortland, he is thankful his professors encouraged him to pursue his internships in Binghamton. Those first tastes of professional hockey prepared him for his demanding job in Washington.

About two-thirds of the Capitals’ roster is comprised of players from foreign countries, meaning Tillotson also plays a large role in making sure work visas are in order and border crossings between the United States and Canada go smoothly.

There is no offseason for Tillotson. He’ll spend much of July and August working on arrangements for the upcoming season. He also helps plan a summer development camp and an annual rookie tournament that is played in September.

Tillotson credits his time in SUNY Cortland’s Sport Management Department in preparing him for his challenging role.

“The program was really helpful with making sure the time I was spending doing stuff outside of Cortland was benefiting me there, too,” Tillotson said. “The staff that was there — David Snyder and Doctor (Ted) Fay — and hearing some of the experiences that those guys had before they started teaching was great. I heard some cool stories of real-world stuff from those guys. I think the staff in that program is top-notch for sure.”

The spring months may be the most chaotic of Tillotson’s year. The Capitals won the Presidents’ Trophy during the 2016-17 regular season, earning more points than any other NHL team. Yet the road to the Stanley Cup is unpredictable. Tillotson can only guess which team Washington will meet in each round or how long each series might last. The difference between a four-game sweep and a seven-game series means even more scheduling of hotel rooms, transportation and meals on short notice.