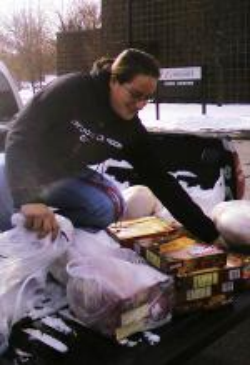 
SUNY Cortland junior and men’s basketball team member Harrison Hefele handed out a team-best 10 assists during a basketball tournament Friday and Saturday in Pennsylvania. On Sunday morning, however, he made his biggest assist of the weekend.

Hefele was among a group of SUNY Cortland student-athletes who handed out boxed meals as part of a fourth-year Thanksgiving food drive effort steered by the College’s athletics department.

Hefele, a physical education major from Greenlawn, N.Y., said the decision to help was an easy one, despite the quick turnaround from the out-of-town tournament.

“This was something that needed to be done just as much as anything else in my daily routine,” said Hefele, a member of the Student-Athlete Advisory Committee (SAAC) that organized the drive, along with Loaves and Fishes, a non-profit meal provider in Cortland.

In all, 56 local residents received food as a result of the Thanksgiving project. Student-athletes on the College’s 27 intercollegiate varsity teams and staff members from Athletics each donated a dollar to raise approximately $700 to purchase the dinners.

“This is a total group effort from SAAC,” Hefele said. “We’re a very close group and we feel that this time of the year, around Thanksgiving, is an important time to contribute and help the people around Cortland that need us the most.”

About 20 student-athletes from six teams, Athletics staff members and a few volunteers began boxing meals at 10 a.m. Sunday in SUNY Cortland’s Park Center lobby. They then delivered the boxes of food to the front doors of 14 local families.

Hefele previously helped out food drives near his hometown. This was the first time he participated in the Thanksgiving event organized by SUNY Cortland student-athletes.

“Every little bit of food helped,” he said. “Even if it’s just a little progress, it’s more than what the people in need would have had.”

Food drive organizers identified the local families in need of Thanksgiving dinners with the help of Kim Hill, the director of Loaves and Fishes.

In their next community-minded activity, SAAC members will participate in the Polar Plunge for Special Olympics on Sunday, Dec. 4, in Brewerton, N.Y.