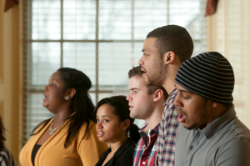 
Only the stage lights were on in Brown Auditorium inside Old Main, as 18 SUNY Cortland students began a gentle harmony, which rose and eventually filled the traditional performing venue with an unexpectedly contemporary sound: the latest hit by Bruno Mars.

The intent look on their faces revealed their purpose was not casual. The two-and-a-half-year-old men’s and women’s vocal ensemble called A Cappella has an April 28 concert in Canada to prepare for and precious little time.

“We created a place where talented vocalists can share their gifts with SUNY Cortland, as well as fit into a vocalist choir with open arms and open minds,” said Cassandra Cristello, a senior childhood education major and co-founder of the musical group.

“A cappella is good for anyone who enjoys singing,” she said. “You don’t have to be the best singer because a cappella is about finding your own spot and pitch within the group, then it is about having actual talent, virtually anyone can join.”

A cappella –– Italian for “in the manner of the church” –– is a soloist or group singing performance without instruments. According to Webster’s New Collegiate Dictionary, a cappella music originally was, and often is still used in religious music. Numerous people all sing with a different tone in order to make the music.

Smaller than a traditional gospel choir, the A Cappella singers have a sound similar to those produced by the much larger, and older, SUNY Cortland Gospel Choir.

The A Cappella ensemble’s inception took place in Spring 2009 when Cortland professor and Gospel Choir founder Samuel Kelley asked Noelle Chaddock Paley, director of multicultural life and diversity, and adjunct professor in Africana studies and philosophy, if it would be possible to get vocalists together.

“What makes us different from other groups on campus is that we all have a say in what we perform and how we perform it,” said Paley, the choir director.

Cassandra and fellow singer, Quinn Singer, were friends and voice students to Paley before they attended SUNY Cortland. Once enrolled as Cortland students, Cassandra, Quinn and Noelle decided to start a signing company. Their choir was originally called “QNC” and only included three performers. They performed all types of genres and different types of music.

After two years of low key rehearsing and performing, the ensemble opened its membership up through auditions last fall.

Auditions were held in the beginning of the semester for the first time because participation in the group would offer the option for one academic credit. Students were asked to sing a short excerpt from their favorite piece or song. Allowing the group to expand has opened doors for the a cappella singers to be more flexible, attend more events, become more professional and take on harder pieces of music.

“We all get together and decide what songs we would like to perform,” Crisitello said. “We all listen to that song, and just join in when we hear something that sounds good. We all have really good ears when it comes to music, which makes us a great a cappella group.”

“The special thing about our group is that we all work together by ear to figure out most of the music we sing,” said Lauren Kovacic, a sophomore and second semester singer from Endicott, N.Y.

The vocal ensemble is taking on more ambitious concerts. On April 1, the group along with the Gospel Choir will travel to Canada for a performance. The vocalists will also sing during the Diversity Conference, which will take place on Saturday, March 9, in Corey Union.

“The A Cappella group is special because it is diverse,” said Talia Parisi, a freshman and first semester singer from Seaford, N.Y. “The personality of each person in the group makes it easy to sing openly and feel the music.”

“This group has a very family-like feeling,” Kovacic said.

“After practices I always leave with a smile on my face, and the music stuck in my head,” Parisi said. “It gives me something to do and something to look forward to every week.”

For more information, contact Noelle Chaddock Paley at noelle.paley@cortland.edu or the Multicultural Life Office secretary Ann Cutler at (607) 753-2336 or via email.