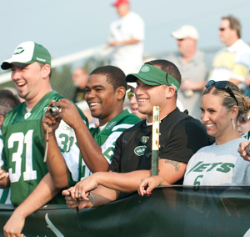 That’s only slightly lower than the $5.8 million estimated impact of the 2010 camp, despite the fact that fewer than half as many public practices were held this summer. Those practices attracted 35,634 visitors to the SUNY Cortland campus over a three-week span, according to “Jets Training Camp 2012: The Economic Impact on the Cortland Community.”

“We are extremely pleased that our partnership with the New York Jets continues to have a profound economic impact in the Cortland community and in the region,” SUNY Cortland President Erik J. Bitterbaum said. “We look forward to hosting them again in 2013.”

The number of public practices was reduced this year from 2009 and 2010, due to the NFL’s new collective bargaining agreement. Negotiations related to that agreement forced the Jets to cancel the team’s Cortland camp in 2011.

Some of the 2012 report’s highlights include:

• Much of the impact in the community — 89 percent of it — stems from visitors that came to Cortland to see the Jets. They spent $2.6 million in the community that would not have been received otherwise.

• New York residents from 57 of the state’s 62 counties visited SUNY Cortland and 83 percent of the camp’s attendees came from New York state.

• Cortland County residents made up 14 percent of the visitors from camp while spectators from adjacent counties — Broome, Cayuga, Chenango, Madison, Onondaga, Tioga and Tompkins — contributed 37 percent of the camp’s total attendance.

• Fourteen percent of the visitors reported that they stayed in a local hotel for at least one night. Revenue for local hotels increased 11 percent, and room occupancy received a 9.2 percent boost compared to the same time period in 2011.

The survey data came from 9,334 people who attended the camp. The majority of them — 63 percent — reported that the 2012 training camp was their first.

The report also highlighted the intangible benefits to SUNY Cortland and the community that resulted from the training camp, specifically the “unprecedented media coverage.”

“The intense coverage, by all types of media, of every aspect of the Jets’ team during August 2012, placed SUNY Cortland in the headlines almost daily,” the report read.

The Jets and SUNY Cortland were featured in pieces by several news organizations outside of the region, including ESPN, The New York Times and The Daily News.

Tangible business and marketing benefits to SUNY Cortland, “the official university partner of the New York Jets,” included more than 50 student internships and practicum opportunities at the 2012 camp.

The College is featured on the 360-degree LED signage at MetLife Stadium during all 2012 Jets pre-season and regular season games. It also receives four season tickets, two Super Bowl tickets and autographed merchandise, which it raffles off to help fund student scholarships.

The survey’s authors expressed their gratitude to several individuals who supported or contributed to the report, including Bitterbaum; Mark Prus, the College’s provost and vice president for academic affairs; William Shaut, the vice president for finance and management; Michael Whitlock, the director of campus activities and Corey Union; Kevin Pristash, the associate director of campus activities and Corey Union; Mary K. Murphy, the associate vice president of finance; Machell Phelps, the president of the Cortland Regional Sports Council; Adam Megivern, the executive director of the Cortland Downtown Partnership; Jim Dempsey, the executive director of the Cortland County Convention and Visitors Bureau; and the student intern team that collected and analyzed data. That team included Franco Giordano, Jacqueline Normoyle, Christina Powers, Ericka Sterns and Alyssa Timmons.