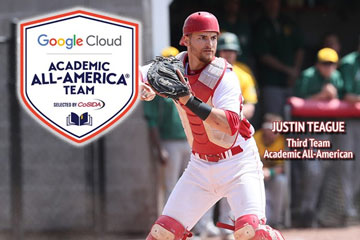 Teague is one of only three catchers recognized nationally on the Division III level. He is an Academic All-American for the second straight season; he was a first-team honoree in 2017.

In 41 games this past spring, Teague batted .324 with three homers, 42 RBI and 26 runs scored. He finished his career ranked eighth at Cortland with 168 games played and 14th with 174 career hits. A career .343 hitter, Teague hit better than .300 in each of his four seasons as a Red Dragon. He was a three-time All-New York Region catcher, including first-team honors as both a junior and a senior, and was a three-time All-State University of New York Athletic Conference (SUNYAC) honoree from 2016-18.

Teague's award is Cortland's 33rd Academic All-America honor and the 13th since 2011. The baseball program has earned seven of those 33 awards.

Cortland finished the season 35-12 and earned its 26th consecutive NCAA tournament appearance - the longest active streak nationally in Division III and the second-longest all-time in Division III behind Marietta's 27 straight showings from 1976-2002. The Red Dragons tied for 17th nationally in the NCAA playoffs after posting a 3-2 record at the NCAA New York Regional in Auburn.