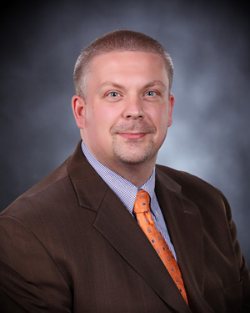 
Christopher A. Kuretich of Newark, N.J., joined SUNY Cortland on July 16 as assistant vice president for student affairs, a senior-level role that will make him second in charge in the College’s Division of Student Affairs.

Kuretich, who most recently has served as the associate dean of students at Seton Hall University, brings 12 years of higher education-related experience to SUNY Cortland. Reporting to C. Gregory Sharer, the vice president for student affairs, he will assume a leadership role in developing policies and procedures for areas related to student affairs and outreach between the College and the Cortland community.

He also will advise the College’s Student Government Association, serve as a review officer for student conduct cases and coordinate any communication with parents and families from the Division of Student Affairs while overseeing the division’s assessment efforts and managing the budgets for different student development areas.

Kuretich comes to Cortland after six years at Seton Hall, where he served as associate dean of students since 2008.

In that role, he oversaw key areas that included student conduct, student activities, university center operations, scheduling and events, Greek fraternities and sororities and new student orientation. Kuretich served as his division’s ambassador to several campus offices while supervising a staff of seven people and managing an operating budget of more than $1 million. He also spearheaded a comprehensive assessment plan for the Division of Student Services.

Kuretich maintained a wide range of campus involvement at Seton Hall, chairing the planning committee for the university’s Sexual Assault Response Team and serving as an academic coach for students with academic difficulties. Other committees and groups he collaborated with included the university’s Student Life Strategic Planning Committee, the Behavioral Intervention Team and Rape Aggression Defense.

He also worked to verify that the work of Seton Hall’s Division of Student Services was compliant with federal regulations such as the Family Educational Rights and Privacy Act, the Campus Security Act, the Drug-Free Schools Act and Title IX.

Kuretich joined the Seton Hall staff in 2006 as its director for community standards, providing oversight for the university’s student conduct process and managing its discipline records database. He was promoted to assistant dean of students in 2007 and assumed supervision of the coordinator of prevention initiatives, a position responsible for health education programming related to alcohol, drugs and mental wellness. In that role, he also took on the duties of coordinating student orientations and assisting a 45-student peer advisor program.

Kuretich launched his student affairs career in the residence life and housing sector. He worked at Montclair State University, first as a community director and later as an apartment complex director, from 2001 to 2006. He also taught a first-year student seminar there from 2001 to 2003.

He holds a bachelor’s degree in communication and rhetoric and a master’s degree in educational administration and policy studies, both from the University at Albany.