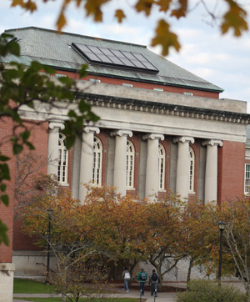 
SUNY Cortland spends more per student on actual instruction than a national sampling of similar public colleges and produces significantly better graduation and retention rates, according to a recent U.S. Department of Education report.

And it accomplishes that while charging tuition that is lower than most of its comparable institutions, where tuition costs are growing at a much faster rate.

“When I look at the report, I’m impressed by many of the figures,” College President Erik J. Bitterbaum said. “But what stands out the most to me is how much SUNY Cortland invests per student on instruction and academic support.”

In 2011, SUNY Cortland spent 22 percent more per full-time student on instruction and academic support than the median amount spent by members of its comparison group, according to the survey. The College that fiscal year invested $11,380 per student on faculty, instructional materials and other items directly related to academic learning. That is $2,068 more than the median $9,312 spent per student on those items by its counterparts.

SUNY Cortland dedicated nearly 70 percent of the $16,823 it spent per student in 2011 to instruction and academic support. The other comparable institutions in the report spent a median of 61 percent of their budgets directly on education. Non-instructional costs included research, student services, institutional support and other core expenses.

“This clearly demonstrates our commitment to academic excellence and to ensuring that all of our students learn to the best of their ability and are challenged by rigorous courses taught by top-notch faculty,” Bitterbaum said.  “Our students have wonderful amenities and a truly incredible range of recreational activities, but our No. 1 priority is the quality and effectiveness of the education we provide.”

SUNY Cortland’s graduation and retention rates also compared favorably. The report looked at what happened to a cohort of first-time students who began their college careers in 2005, and found that 67 percent of the SUNY Cortland students graduated by 2011, compared to 42 percent for the other institutions.

Regarding tuition cost and required fees for full-time undergraduates during the 2011-12 academic year, SUNY Cortland offered an education slightly less expensive than the median of its counterparts, at $6,574 compared to $6,682.

However, the College’s tuition has increased by only $752, a rise of less than 13 percent, since the 2008-09 academic year. The median tuition of its comparison group, meanwhile, jumped more than 23 percent during the same time period.

In 2011, the State University of New York adopted a “rational tuition” policy designed to raise much-needed revenues in a way that would allow families to better plan college financing and avoid surprise tuition hikes. That policy calls for a modest, $300 annual bump in tuition for New York state resident undergraduate students over five years.

“The report shows that SUNY Cortland education is a great value,” Bitterbaum said. “We make the most of our resources and make educating students our top priority.”