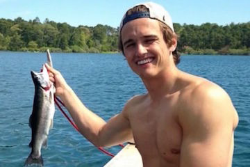 
Jack Jakubek ’16, a champion Red Dragon swimmer who drowned shortly after graduation during lifeguard tryouts on Cape Cod, will be honored in Cortland Saturday, Oct. 1, at two memorial services.

At the end of the ceremony, Jakubek’s brother, Kramer, will officially change the team’s record board to reflect the Jakubek’s most recent swimming accomplishment: breaking an 18-year-old school record in the 200-yard breast stroke.

Jakubek, an outdoor recreation major, will then be honored in a second ceremony at Lime Hollow Nature Center, where he frequently volunteered.

Participants will gather in the Lime Hollow Nature Center, 3277 Gracie Road, at 2:30 p.m. for a reception and an opportunity to share memories of Jakubek in an informal setting. It will be followed by a 1.5-mile hike in his memory, during which plans for a permanent memorial will be presented.

“Both of those places were a big part of Jack’s life while he was at Cortland,” Tobin said. “Jack was a truly amazing young man and his tragic death ripped a deep hole in our community.

“He had friends from all corners of the campus. These two events will give us all an opportunity to come together, remember how Jack touched our lives and reflect on the special person we have all lost.”

Jakubek, a former swim team captain, had planned to return to Cortland in the fall to pursue his master’s degree and serve as a graduate assistant coach with both the Cortland adapted swim team and the varsity teams.

Less than two weeks after Commencement, however, Jakubek failed to surface during a lifeguard fitness test he had completed easily in the past. A native of Newburgh, N.Y., he was 22.