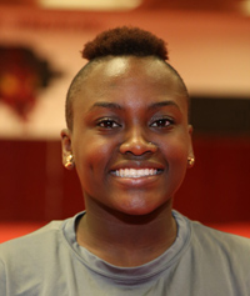 
She’s called “Tiny” but Nyasa “Tiny” Bakker’s influence on SUNY Cortland’s varsity wrestling team has been anything but small.

Bakker, a sophomore philosophy major from Brooklyn, N.Y., is the first female that SUNY Cortland’s varsity wrestling team has ever had on its official team roster.

She also has served as the varsity team manager since early October of her freshman year, traveling with the team and helping to record statistics.

She competed in her first varsity team match this past February in the last home meet of the season.

The College publicized Bakker's feat among 40 Red Dragon sports facts during the third annual Division III Week, which took place from April 7 to April 11 and marked the 40th anniversary of Division III athletics.
Before arriving at SUNY Cortland, Bakker wrestled for her high school’s varsity team and was recruited by women’s teams in New York City and throughout New York state.

“I competed in the 2011 and 2012 New York state girl’s championships, and also went to two different national competitions,” said Bakker. “In my second competition, which was my senior year of high school, I placed 7th overall, and was honored with an All-American title.”

When she arrived at SUNY Cortland, wrestling wasn’t the first sport to interest Bakker. She tried out for the club gymnastics team, but realized that it was not for her.

“I had a lot of fun while I was on the club gymnastics team but, for me, it lacked the intensity and excitement that wrestling had always given me,” Bakker said.

“I missed wrestling and being around the sport so much, so I decided to try club wrestling at first,” she said.

She joined the College’s club wrestling team, during the middle of her second semester of freshman year and recalls being nervous because of the difference between competing against males at a high school level and at a college level.

Despite her apprehensions, a passion for the sport immediately returned. It was too late in the season for her to compete at the time, but she continued to work out with the club team on a regular basis and attended every practice that she could.“The males that I wrestle aren’t boys anymore, they’re men,” said Bakker.

Bakker decided to test her limits even more than before, and tried out for SUNY Cortland’s varsity wrestling team in Fall 2013.

“I didn’t have to do anything specific as a female to make the team, I just had to attend all of the required practices and tryouts,” said Bakker.

“Bakker attended practices and work-outs on a semi-regular basis,” head coach Brad Bruhn said. “She worked practices around her schedule and attended when she was available.”

“My initial plan was to make the team, work out, practice regularly and then compete in the women’s open competitions in New York and the East Coast as well,” Bakker said.

Bakker’s plan fell short when she realized that the women’s season picks up towards the end of the men’s collegiate season. It would be difficult for her to compete in matches without missing classes or having to pay a lot of money to do so.

“Matches would fall on Fridays, Saturdays and Sundays, so I would have to pay for registration and transportation, and miss my Friday and sometimes Monday classes as well,” said Bakker.

Bakker’s greatest wrestling moment to date was when she competed in her first match Feb. 9 in the team’s final home match of the season.

Although she lost her match, she savored the experience.

“Our starter couldn’t make weight and my coach was going to forfeit the match,” recalled Bakker, who competed in the 125-pound weight class.

Bakker’s teammates asked Bruhn if Bakker could compete instead.

So Bruhn called Bakker and told her to get ready for her first in-season match.

“I was terrified,” said Bakker, who was in Park Center when she got the news. She ran onto campus, grabbed her gear and made it back just in time for the match.

“I would always joke to my friends and say that I was the equivalent of fifth string and that it was near impossible for me to ever be a part of the starting line-up, even for a day,” Bakker said. “So you can only imagine the shock I was in.”

Bakker warmed up with her teammates, and said she was so nervous that she almost became sick. Even more nerve-wracking was that she was wrestling in the lowest weight class, so her match was first by default.

“I left everything I had on the mat,” Bakker said.

“What surprised me the most was the support from my teammates,” Bakker said.

They cheered Bakker on and told her how proud they were of her for even trying. She stepped up for a fellow teammate and competed with the team’s best interest at heart, they agreed.

“There are about five guys on the team that I’m pretty friendly with, but to have the other members of the team acknowledge my hard work and effort was a rewarding feeling,” Bakker said. “At that point, I felt like I was a true member of the squad.”

“It was pretty exciting to watch Nyasa compete in front of a large crowd for the first time,” said James Ondris, a senior team captain. “She really stepped up for the team when we needed her and she did an excellent job.”

"The team loves having her around because she is a hard worker and does so much for us,” Bistis said. “The fact that she stepped up for us for that match on such short notice just shows that she is a great team player and has great character."

At times, it’s easy to feel ignored by her teammates, Bakker said.

“I think that they just don’t know how to act around me, since I’m a female,” she said.

She’s thankful, however, that they never have been disrespectful towards her and that they allow her to train among them.

Overall, Bakker is grateful for the lessons that wrestling has taught her.

“It pushes me and it forces me to try,” said Bakker.

Bakker applies that same mindset to life outside of wrestling.

She also is a member of the Pan African Student Association (PASA) and modeled in last year’s fashion show that PASA organized.

Bakker credits most of her success, especially as it relates to wrestling, to Bruhn, her coach.

“I've heard of a lot of places that don’t have a women’s program,” Bakker said. “When girls attempt to try out for the teams, coaches usually brush them off.”

She understands the worries or reservations male wrestlers might express, but she’s thankful that Bruhn believed in her potential.

“Coach Bruhn never doubted my professionalism or my seriousness,” Bakker said. “He never made me feel uncomfortable or as if I didn’t belong, he never hesitated to help me or include me and he didn’t make a big deal out of me being in the room. He just expected that I come in and work hard.”

Bruhn hopes that the opportunity she was given to train with the varsity team will spark her interest to free-style train again.

“She’s very interested in the sport and dedicated a lot of her time to the team, especially when she was manager and traveled with us to meets,” Bruhn said. “It takes a lot of courage to step in and be able to work out and train among the incredible males that we have on the team. Tiny was not afraid to work.”

SUNY Cortland’s varsity wrestling team, ranked No. 5 in the nation at the NCAA Division III level, finished its season with a 13-4 dual meet record, and earned its second straight regional title March 2.

Bakker said she is thankful for the opportunity to compete for one of the nation’s best programs and practice among the opposite sex.

“I wish there was a specific thing that I could say I loved most about the sport, but I love every single thing about wrestling,” she said.