Athletics Logo Gets a Makeover 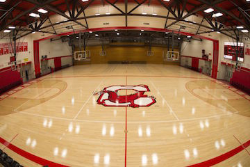 You may have noticed that the Red Dragon logos on some of the apparel at the campus store looks a bit different these days – stronger, sharper, more ferocious.

You might have thought the same thing about the dragon in the new logo on the floor of Corey Gymnasium in Park Center, or the one in the center of the recently upgraded White Field at the SUNY Cortland Stadium Complex.

The new primary and secondary athletics logos represent an effort to blend SUNY Cortland’s proud traditions with an updated look conveying the determination, grit and competitive spirit exhibited by our students in athletics, academics and improving the world around them.

“These new images provide a unique identity that reinforces the unrivaled success of our student-athletes and our institution as a whole,” said Mike Urtz ’94, the College’s director of athletics. “We set out to keep our primary logo largely intact as a way of preserving our storied past. At the same time, we sought a bold look that represents excitement for the future, and we achieved it with the new secondary mark. This was a win on many levels.”

The College’s primary logo received very minor adjustments to make it more attractive, easier to reproduce and more consistent in appearance both on and off campus. A new secondary mark, which features a close-up of the red dragon’s head, will not replace the primary logo. Instead, it offers a new look for the College’s athletics teams to wear on the field and a new way for students, alumni and fans to display their Red Dragon pride.

Graph-Tex, a Cortland-based company that specializes in graphic design and custom screen printing, created the logos. SUNY Cortland also has published a new style guide specific to the acceptable use of its athletics identity.

“We’ve received a lot of positive feedback from student-athletes, coaches, alumni and campus community members,” said Jaclyn Lawrence ’12, the College’s assistant director of athletics for events, marketing and development. “It’s important for one of the strongest Division III athletics programs to have an attractive and consistent visual image.”

Founded in 1868 as Cortland Normal School, SUNY Cortland changed its nickname from the Normals to the Red Dragons in 1933. Since then, the College has earned 25 national team titles in 10 sports, 102 individual national crowns and more than 200 conference championships. SUNY Cortland boasts one of only five Division III programs nationally — out of approximately 450 — to place in the top 25 of every NCAA Directors’ Cup standings for overall athletic excellence.