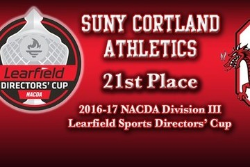 Cortland is one of only five schools nationwide, and the only New York institution, to place in the top 25 each of the 22 years the standings have been compiled on the Division III level. The other schools that hold that distinction are: Williams College (Mass.); Amherst College (Mass.); Middlebury College (Vt.); and Emory University (Ga.).

Cortland had eight teams finish in the top 20 in 2016-17 NCAA postseason competitions, including seven top-10 finishes. The men's lacrosse and men's outdoor track and field teams each tied for fifth nationally. The wrestling team finished seventh and the men's indoor track and field team placed ninth, while the men’s soccer, baseball and softball squads each tied for ninth place. In addition, the women's lacrosse team tied for 17th place.

The standings are compiled based on schools’ national finishes in different sports. Teams earn points by qualifying for the NCAA postseason and additional points for advancing in the playoffs. The national champion in each sport earns 100 points.

There are four Directors’ Cup Awards, one to honor overall champions in each of the NCAA’s Divisions (I, II and III) and the NAIA. It is the first-ever cross-sectional all-sports national recognition award for both men and women. NACDA, which is now in its 52nd year, is the professional and educational association for more than 12,500 college athletics directors, associates, assistants and conference commissioners, along with affiliate individuals or corporations. More than 1,600 institutions throughout the United States, Mexico and Canada are represented in NACDA's membership.