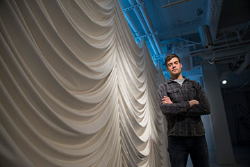 His latest masterpiece is a freestanding, 45-foot long Austrian-style curtain that fills a wall of windows in SUNY Cortland’s Dowd Gallery. The solid, immoveable sculpture has realistic folds and creases that appear ready to move in the slightest draft.

In fact, the giant curtain — like most of McMahon’s other works — is much too big and fragile to fit through a gallery door once the show is over.

No matter. To him, violently destroying the exquisite-looking art is an integral part of the exhibition. Although each work involves months of planning and weeks of painstaking craftsmanship, McMahon chooses to emphasize the fleeting nature of his creations and always plans their destruction in a public performance that ends with a monumentally loud and emotionally satisfying crash.

“Knowing the defined temporality of the works in the show brings an immediacy and rarity to one’s interaction with them, a sort of premonition of nostalgia for the sculptures,” said McMahon.

“The overall objective of this exhibition’s fleeting actions is to give weight and preciousness to the viewer's experience with both the art and architecture involved, perhaps provoking a similar awareness about the life span of the constructed environment outside the Dowd Gallery.”

His SUNY Cortland show, titled “Semblance,” opens Monday, Jan. 23 and will feature such a grand finale.

On the final day of the exhibition on Tuesday, Feb. 21, promptly at 5 p.m. McMahon’s main gallery installation will be destroyed in what he describes as “A Momentary Event with a Sculpture.”

“The short-lived apex of works exist between the actions of construction and deconstruction,” McMahon said. “In an instant, this monumental piece will be reduced to rubble by the single, graceful drop of a steel bar, allowing light from the wall of windows behind it to flood back into the room.”

Other, less cataclysmic, events related to the show include:

Gallery hours are 10 a.m. to 4 p.m. Monday through Friday and by appointment. The gallery is free and open to the public, as are all events related to the “Semblance” exhibition.

McMahon has a BFA in ceramics from the New York State College of Ceramics at Alfred University and an MFA in sculpture and extended media from Virginia Commonwealth University.

His graduate studies were supported from 2009 to 2013 by a Jacob K. Javits Fellowship, awarded by the U.S. Department of Education. The fellowship assists students with financial need, exceptional promise and superior academic ability for graduate level study in selected fields of arts, humanities and social sciences.

He is the co-founder and co-director of the Belfry, an artist-run exhibition venue in Hornell, N.Y., where he resides.

McMahon paused to note that he is inclined to look upon all structures, including Dowd Gallery, as ultimately temporary.

“Handy” is a good word to describe McMahon. He also produces unseen props using many materials. McMahon sewed flimsy cloth into curtain-like platforms to be sprayed with wet plaster and then peeled away from the finished piece. He also uses carpentry skills to build boxes and frames that shore up some installations. Metal pipes are cut and welded into forms that may support a curtain during a sculpture’s creation or swing from ropes to smash it into a pile of plaster shards and dust.

In Dowd’s main exhibition space, the graceful, white Austrian-style curtain with a series of pleated drapes appears to cover Dowd Gallery’s wall of horizontal windows, inviting passersby outside the Dowd Fine Arts Center to come inside to take a closer look.

An adjacent small gallery area is almost completely filled by bulging, puffy structures. The east gallery installation of the “Semblance” exhibition doesn’t lend itself to the pomp and drama of a public demolition and so McMahon later will break apart and remove it privately.

In the third space in the show, the west gallery, a series of video recordings of the destruction of McMahon’s previous installations will be projected. The muted sounds of the smashing of plaster will be audible throughout the entire gallery, reminding the viewer of the forthcoming ruin of the current pieces.

McMahon’s immense works invariably transform the space they occupy and interact with its architecture. The pieces are imbued with performance.

“Suggestive of theatre, it alludes to the role of the gallery as a temporary stage and the construction and destruction of the piece as a performance,” said Dowd Gallery director Erika Fowler-Decatur.

“In contrast, the installation in the east gallery assertively overtakes the sunken space,” she said. “Several giant, white, pillow-like forms squeeze around the corner of the entrance wall are cinched by the ramp and push upward, crowding the pipes in the ceiling.”

McMahon found himself favoring the fleeting over the perpetual while still an undergraduate.

“I very quickly realized that I was much more interested in the material of clay than I was of ceramic,” McMahon said. “I had so much enjoyment working with the visceral, physical material. And then I would put it in the kiln and get it out and it wouldn’t feel the same at all. So my senior year, I really started investigating working with clay and calling it done and then suspending these big forms on the wall. That was the point where I was working with installations, dealing with space, dealing with specificity, trying to shift the properties of the material: trying to use something we can intuitively understand, but shift the context of how it normally operates.”

McMahon’s choice of materials and sites always dictated that he ultimately would destroy his installations. Right before his residency, on one memorable day he videotaped the process just for himself to remember. In reducing the experience to one instant on film, he embraced the idea of destruction itself as artistic performance.

“In that moment of failure the piece yielded so much about the material and so much about the piece,” he said. “The sight and sound went out the window and a kind of bodily experience started happening. I decided I had to set out to make a piece to destroy as the work.

“That’s where the curtain came in, and it lends itself to performance,” McMahon said. “There’s the scale and the architectonic nature of it. The way the form is able to connect with the space. The curtain, for example, it’s blocking architecture because of its scale. Then, in one second, it can be gone. I kind of like the relationship between those things. There’s a month building the piece, and in a moment, it’s gone.”

Receiving the Javits Fellowship gave McMahon the freedom to experiment with art that isn’t permanent — with all the financial implications of destroying rather than selling his artwork.

“It was like winning the lottery, but you had worked for it, so it was not quite out of the blue,” McMahon said. “That was a treat.”