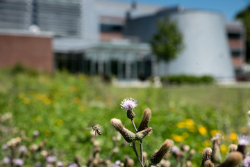 
The late summer weather may be hot and sticky in Central New York, but SUNY Cortland has again been identified as one of the coolest campuses in the United States.

The Sierra Club recently named the College to its annual “Cool Schools” list of the nation’s most environmentally friendly schools for the third consecutive year.

SUNY Cortland was ranked No. 76 in the environmental organization’s report, which assesses two-year and four-year degree-granting institutions in the U.S. and Canada based on their efforts to combat the climate crisis. The College was the highest-ranked SUNY comprehensive college on the list.

“Sustainability is a top priority for the College,” President Erik J. Bitterbaum said. “As an institution devoted to preparing students for the future, we owe it to them, to our community and to the world our graduating students will inherit, to use all of our resources wisely and creatively.”

This was one of three recent awards SUNY Cortland earned for its sustainability efforts.

The Sierra Club separately named SUNY Cortland one of its “14 Pollinator-Friendly Colleges That Have Us Buzzing,” for the steps the College has taken to include more than 50 native plants in gardens and the bioswale located on campus. The College also was  lauded as being pollinator-friendly thanks to the William H. Parks Family Center for Environmental and Outdoor Education, which promotes environmental outdoor education at Raquette Lake, Hoxie Gorge and the Brauer Field Station.

SUNY Cortland also was recognized by the Association for the Advancement of Sustainability in Higher Education (AASHE) for excellence in maintaining the campus grounds.

The College was ranked No. 8 in the grounds category of AASHE’s 2018 Sustainable Campus Index, which graded 477 institutions in 11 countries. AASHE considered factors such as minimizing the use of toxic chemicals, protecting wildlife habitat and biodiversity and conserving resources when ranking campuses for this subcategory.

SUNY Cortland was the highest-rated campus in New York state and placed sixth in the grounds category among U.S. colleges. The American College of Greece in Athens, Greece and the Universite de Montreal, Canada were tied for second place.

Sustainability, particularly in areas of maintenance of college grounds, has been one of SUNY Cortland’s key initiatives for many years. The College was designated a Tree Campus USA by the Arbor Day Foundation and has created the SUNY Cortland tree walk to digitally map the campus’ urban forest. The 35 species of trees have been tagged with QR codes that may be scanned with smartphones to access more information.

Efforts on the Cortland campus have been spurred by the College’s long history of conservation rooted in the W.H. Parks Family Outdoor Center at Raquette Lake. The 407 acres of property on Raquette Lake have been the foundation of the College’s outdoor education program and have enhanced the educational experience at SUNY Cortland since 1949.

Bee City USA, a national organization dedicated to raising awareness about natural pollinators, such as bees, renewed the College’s Bee Campus USA standing in March. Members of the grounds service crews have worked to plant local pollinator-friendly species and use a least-toxic integrated pest management plan. Native plant fairs, workshops on caterpillar gardening and talks on milkweed pollination have added to awareness among students, faculty and staff. SUNY Cortland, along with Vassar College in Poughkeepsie, are the only two Bee Campuses in the state.

A bioswale, which is a landscaped area designed to remove debris and pollution from surface runoff water, was constructed next to Bowers Hall during renovations to the building in 2013. Mike Hough, a lecturer in the Biological Sciences Department, has worked to decide which plant species will work best to create a pollinator habitat for birds and bees as well as butterflies.

“Many native bees and butterflies have been spotted since the plants were installed,” Hough said. “There are several species of milkweed and monarch caterpillars have been observed on most of them. Monarch adults are now a regular occurrence on campus. I have also seen several skippers, swallowtails, and duskywings.”

Seeds were locally collected and others were donated by Cornell University’s Botanic Gardens. Biological Sciences students have helped grow seedlings in the College’s greenhouses and pull weeds from the bioswale since it was created.

The College's future plans include planting an apple orchard on the lower campus and setting a minimum number of new trees planted on campus each year.

BestColleges.com named SUNY Cortland one of the greenest campuses in the country in 2015, lauding the College’s efforts to become the first SUNY campus to fill its electrical needs with renewable sources such as wind and solar.  The college continues this commitment with the recent installation of two smaller solar array installations at the W.H. Parks Family Outdoor Center and at the Cortland campus on top of Whitaker Hall.

Students and faculty are regularly engaged in conversations about sustainability through Green Days events such as the Greenflix film series, which screened four documentaries related to the environment during the spring 2018 semester.

Other categories used by AASHE to measure sustainability include curriculum, public engagement, energy, transportation and water, among others. The full Sustainable Campus Index is available online.

The Sierra Club uses data from AASHE to build its “Cool School” rankings, weighting more heavily on its priorities of air and climate, energy, transportation and water.

For more information on ways SUNY Cortland is working to make the campus green, visit the Sustainability Office online.