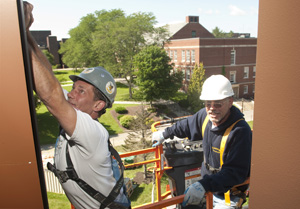 And the familiar sight of construction workers lunching alongside students or walking to their worksites toting hard-hats is not going away any time soon.

The aging of the SUNY Cortland campus, coupled with its overall growth in recent years, has spurred some of the most ambitious facility planning, design, and construction and renovation projects in the College’s long history.

The only period of campus construction that comes close to the current volume is the decade after 1948, when the Cortland Normal School, then a small teacher’s college, was acquired by New York state for the SUNY system. As students return to campus for the fall semester, approximately $200 million in construction projects have just been completed, are underway or are on the drafting board.

“I wasn’t here 40 years ago and I don’t know how concentrated construction was when SUNY was building up the system,” said Jeffrey Lallas, the College’s director of facilities planning, design and construction. “But this is certainly the most construction since then.”

After decades of little or no new facility construction, the College administration envisions breaking ground on a $56 million student life center, an $18.5 million residence hall, and a $43 million addition and renovation project for Bowers Hall. Architects and contractors for all three efforts will strive for the highest level of green construction, in keeping with SUNY Cortland’s commitment to set an example for environmental sustainability.

College officials also are planning a $22 million facelift for Dowd Center’s main and second floors and are only somewhat delaying their practice, begun a decade ago, of renovating at least one student residence facility annually. The most recent of these, a $7 million upgrade of Cheney Hall, was completed shortly before students were scheduled to arrive on campus for the fall semester.

The College’s commitment to use its resources as effectively as possible and reduce the campus’ carbon footprint is also contributing to the boom. Energy-efficient windows were installed in the Miller Administration Building on Graham Avenue this summer, and will be followed by a more effective heating and ventilation system in September. The campus is also planning a $26 million upgrade of its electrical distribution system and replacing its outdated central steam plant with a system of individual, energy-efficient boilers.

Much of the current construction is overdue.

“Just to maintain the facilities at this point requires major renovations,” Lallas explained. “It’s not practical to just put on a new roof or just repair an electrical system. It makes sense to aggregate them and handle them as one project.

“What we’re doing is we’re going through our aging facilities and revitalizing them and repurposing them,” he said. “In Bowers Hall, for example, it’s not enough to just replace the sheetrock in the building. It’s time to meet the new health and safety standards and to accommodate the functional needs of faculty and students.”

Many of those needs will be met by the new student life center, which the College hopes to break ground on next year. The state-of-the-art project will create both temporary and permanent jobs. It will not be a mere “workout facility” or “recreation center, ” but the new, central hub of student life. Positioned on the former Carl “Chugger” Davis Field, it will transform an under-utilized campus space and enhance environmental safeguards in the area. In this location, the center will act as a bridge linking the upper and lower sections of SUNY Cortland’s long, twisting campus while providing healthy recreational opportunities for all students, faculty and staff.

The Student Life Center could become the first gold-certified Leadership in Energy and Environmental Design (LEED) building in Cortland County. As such, the center will be among the most environment-friendly facilities in the region.

New Residence Hall on Drawing Board

The LEED gold standard of sustainable construction will be applied as a minimum to all future new building projects, including a planned new residence hall, scheduled to begin construction late next spring. The $18.5 million facility will use alternative methods of generating energy on site.

“The project will be something of a mirror of what was done at the north end of the residence quad with the Glass Tower Hall,” Lallas said. “Contractors will first remove the annexes between Hayes and Hendrick halls and erect a structure somewhat bigger than the Glass Tower Hall — using, by the way, the same architect.”

The new residence hall will delay the renovation of DeGroat Hall, the next student residence building on the 10-year renovation list.

“We changed the schedule and decided to build the new residence hall building before renovating DeGroat Hall so the impact on students would be less,” Lallas said. “The new residence hall will add 220 beds and help the campus handle the possibility of higher enrollment.”

Cheney Hall, a 60-year-old building, began its first major renovation starting in December. An elevator and other amenities were added to the stately brick building adjacent to Brockway Hall. The $7 million project will be finished in time for students to move in this fall semester. The project has opened up the lobby view to the basement lounge area and added 12 beds.

“Because we finished this project much earlier than expected, about 70 rooms around campus won’t need to be tripled with students this fall,” he noted. As for DeGroat, the College is now scheduled to bid the project in Fall 2013 and begin construction that December.

The $43 million Bowers Hall addition and renovation projects will be going out to bid in late fall with construction to begin in late fall or early winter.

What is commonly known as the museum wing will be taken down. A small new, three-story wing containing a museum level on the first floor will be erected in its place along with new classrooms and laboratories. Meanwhile, the oldest wing it faces will be gutted.

“This is a very extensive renovation,” Lallas said. “Most of the walls will be moved and all the HVAC, electric and infrastructure will be replaced. We tried to use as much of the shell as possible in order to be as sustainable as possible, to avoid tearing the whole thing down and filling a landfill with the debris. There are a lot of challenges to building within the shell of a 50-year-old building so it’s been a difficult project for the designer.”

The Dowd Center’s lower two floors are under design to receive a $22 million renovation starting next summer. The yearlong construction project aims to finish the work begun years ago when the top floor was completely renovated.

“This will be a complete renovation for art, theater and music,” Lallas said. Some of the art studios will gain windows where there were none before.

In the Miller Administration Building, a $1.6 million renovation project will continue through the end of September with the addition of a more effective and energy-efficient heating and ventilation system and new boilers.

Employees, students and the public will be more comfortable and better able to control their space temperature when the project is done while working in a more energy-efficient building.

In terms of campus-wide improvements, the College is planning the first phase of a $26 million improvement to the electrical distribution system as part of a larger project to completely upgrade the campus infrastructure.

A new and much more powerful primary electrical substation will be constructed on campus alongside the one it will eventually replace, according to Lallas. Workers will excavate and replace distribution lines and conductors, much of which dates back about half a century. The new wiring will be rerouted in entirely new pathways on campus. The electrical network will increase the reliability and electrical capacity on campus.

Just as invisible to students, but no less important to the College, is the $12 million campus-wide satellite boiler project, which goes out to bid this month. It is scheduled to begin in October and will take approximately two years to complete. The high-efficiency boilers installed in each building will replace the College’s aging and less efficient central steam plant. A network of underground gas pipes will replace the outdated steam pipes that currently let much heat go to waste.

“This will tremendously reduce the natural gas energy usage on this campus,” Lallas said. “It will save both in cost and in carbon footprint and impacting the environment — a 35 percent savings in utility cost and energy conservation.”

“An added benefit will be that we will never again have to dig up and repair the underground steam pipes, an understandable difficulty especially when done in the heating season.