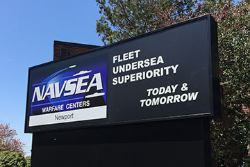 
SUNY Cortland has partnered with a renowned Navy research center based in Newport, R.I., to explore how students, science and submarines can strengthen each other.

The College is the first in the SUNY system to have an agreement with the Naval Undersea Warfare Center Division Newport (NAVSEA) base, a center perhaps best known as the site of submarine research and periscope repair.

Although it exists for military research carried out by U.S. government personnel, the facility has a long tradition of partnerships with civilians through universities around the country, according to Moataz Emam, chair of the Physics Department and campus liaison for the partnership.

Title 10 of the U.S. Code allows the secretary of defense to authorize military laboratories to enter into education partnership agreements with all levels of U.S. educational institutions.

Laboratory directors are encouraged to provide appropriate equipment loans and transfers of surplus property. They can make laboratory personnel available to teach science courses or assist in the development of science courses and materials for the institution, provide faculty sabbatical and student internship opportunities, and involve faculty and students in defense laboratory projects. Laboratory staff also might help develop future credit-bearing courses related to their defense laboratory projects or provide academic and career advice to students.

On May 17, five SUNY Cortland representatives took a private tour of the NAVSEA facilities, led by enthusiastic military scientists and engineers who gave the campus contingent an idea of studies in which faculty and students might become involved. Nav. Capt. Michael Coughlin, recently appointed as head of the Newport Center, was their host.

The group saw a prototype for a submarine that flaps through water like a sea turtle. They looked in on mobile periscope technology, which would free the sub lookout from being rooted in front of a traditional periscope. They also met sonar researchers who try to study and offset military technology’s potential harm to sea mammals.

“The things we’ve seen were particularly amazing, but we can’t tell without input from the faculty what will be useful and what will not,” Emam said.

The contract allows any SUNY Cortland department to engage in studies at the NAVSEA center, he said.

The trip followed up on a partnership agreement between the College and NAVSEA that was signed about a year ago.

“This visit was not an open house, it was planned just for us,” Emam said. “They had planned out all the details, it was amazing. They escorted us and took us around in a van.”

The contingent included David Duryea, the College’s vice president for finance and management and a retired Navy admiral who formerly ran the NAVSEA base.

“I was aware of the scientific and engineering work they did and felt it could be of interest to our students and faculty,” Duryea said. “I also still knew the leadership.”

“What struck me, and all of us, was how excited everyone was about what they were doing,” Emam said of the tour. “They were so incredibly excited they didn’t want us to leave. It’s the mark of a true scientist; they were very forthcoming about questions.”

Students and faculty in many of the STEM majors and other disciplines would find a lot to study at NAVSEA complex, Emam said. At SUNY Cortland, that includes students interested in physics, mathematics, chemistry, biology, geology, computer science, engineering, geography, history and education.

“There are no specifics yet,” Emam said. “Based on faculty interest, for next fall we might invite researchers to visit in order to start the discussion on how we can move forward and get more of the campus involved, get buy-in.”

Student interns can begin engaging in summer internships next year.

Some faculty who took part in the visit — and some who didn’t — already are thinking of ways to get the most out of the arrangement.

“I can see a lot of potential with this partnership for our geographic information systems students, including gaining experience with large data sets such as analyzing marine mammal migration patterns and looking at how they relate to shipping routes,” said Wendy Miller, associate professor and chair of geography, who did not accompany the group.

Pagano has expressed interest in using a small, remote-controlled submarine to explore the depths of Raquette Lake with her biology students.

“Students can help design, can help build it,” Emam said of that work. “We won’t need to start from scratch, but we might need to modify something that works in the ocean to work in a lake.”

The Marine Mammal Research Program studies a variety of things, including the effect of sonar on marine life, Emam said.

“They pointed out that even though the Navy has been criticized for having a bad effect on marine life because of sonar, it is in fact the Navy that’s spent the most money to research how to avoid that,” Emam said. “There is a lot of technology involved. There’s a lot of biology obviously: keeping track of the mammals, the effect of the migration patterns, tagging them. There’s a lot of things our students may be involved in.”

Fantacone said he organized a workshop in April in a College physics laboratory that was led by Chris Hansen, technical director for SeaPerch, NAVSEA’s underwater robotics project. The event attracted 15 area master teachers and six members of the College’s Physics Club.

“My interest really is from the teacher’s perspective,” Fantacone said. “So I’m looking into professional development opportunities for the teachers in the Master Teacher Program.”

Future physicists may be interested in two installations, the Payload Integration Lab and the Electronic Sensors and Periscope Maintenance Facility.

At the former, scientists test the submarine weaponry in large water tanks.

“They fire torpedoes at actual speed, slow them down and stop them and study the effects it would have,” Emam said. “It’s a very ‘physicsy’ kind of thing.”

The other facility aims to fulfill the Navy’s long-term plan to replace the traditional optical periscope with photonics, electronics and digital telescopes.

“You don’t need to be right there by the periscope in the usual way,” Emam said. “You can be elsewhere in the submarine and switch on a screen and see everything. There’s a lot of engineering and physics involved.”

Of course, faculty and students might consider taking the plunge with an open mind to identifying a research topic no one inside or outside the Navy has thought of before.

“There’s a lot of details in all of those projects that might be of interest to a student as a research focus,” Emam said.