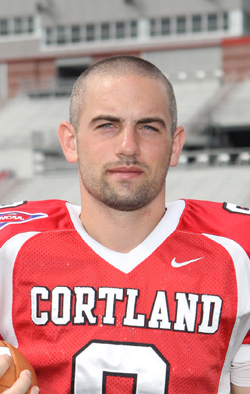 Pitcher, who expects to graduate in December with a master’s degree in sport management, received the $2,000 scholarship during the union’s 2011 Fall Delegate Assembly from Sept. 23 to 24 in Albany, N.Y.

He was among five students who were awarded scholarships at the event and this year’s only graduate student recipient.

The award, named in honor of former UUP President William E. Scheuerman, is given to an outstanding full-time SUNY graduate or professional school student who exhibits dedication to the goals and ideals of the labor union movement.

As Cortland’s star quarterback, Pitcher plans to use his leadership ability to coach football.

“Coaching is one of the best ways to impact the athletic, social and academic lives of others,” Pitcher said. “Like union leaders, coaches teach fairness, dedication and the power of working together.”

Pitcher has underscored these tenets in his inspirational speeches to his classmates on campus, to area high school students, and to the sports community at a National Football Foundation banquet held in Verona, N.Y.

Pitcher earned a bachelor’s degree from SUNY Cortland in 2010 while maintaining a 4.08 GPA and serving as captain and quarterback on the College’s football team.

He has deep ties to SUNY Cortland and the State University system. Pitcher is the son of Michael Pitcher, a SUNY Cortland lecturer who also coordinates audiological services for the Communication Disorders and Sciences Department. His brother, Matthew, is a senior kinesiology major at the College as well as a football team offensive lineman. Both his parents earned their degrees from SUNY Geneseo.

To qualify for the award, Pitcher met the scholarship criteria of carrying a course load of a least nine credits after having completed at least nine credits, while holding a cumulative grade point average of 4.0.

Former UUP President William E. Scheuerman helped secure seed money for the UUP scholarship for graduate and professional school students. The scholarship was made possible with money bequeathed to UUP by the late Katherine Carter. Cater made numerous contributions to the fund in memory of her late husband, Robert, a SUNY Oswego union member and colleague to Scheuerman.

The application deadline for the 2012 scholarship is March 1, 2012. For more information or to complete an application, visit UUP’s website at www.uupinfo.org/scholarships/scholarship.html. Applications also are available at UUP chapter offices or at campus financial aid offices. Applications may also be obtained by calling UUP’s administrative office in Albany toll-free at (800) 342-4206.